Skip to content
Why We Need To Love Trump’s Hate!

Why We Need To Love Trump's Hate! 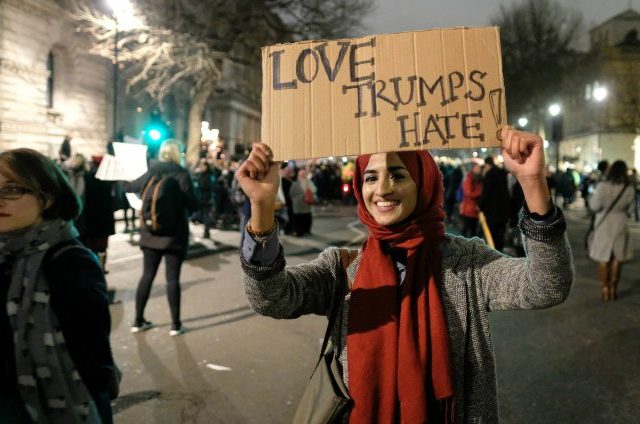 Donald Trump’s most recent visit to London, on the 12th July, had a profound effect on those in the UK. Protesters took to the streets to showcase their feelings of anger towards Trump’s policies. The protests taught us a lot of lessons; with the heart of the protests illustrating that people should be accepting of others.

Organisers approximated the number of protestors to 250,000, with a range of nationalities taking part from the USA to India.

The Trump administration has been berated on a number of topics, most recently for separating 2,000 migrant children from their parents; a decision which was eventually overturned. Some of Mr Trump’s other unpopular decisions include his 90-day travel ban on visitors from Libya, Sudan, Somalia, Syria, Iran, Iraq and Yemen, and his close relationship with Russian President Vladimir Putin.

The nature of the protests was dignified in parts and highlighted the importance of making use of peaceful methods in order to achieve aims first and foremost. Conversely, however, there was also a strong level of violence and anger, which was reflected in some posters. Donald Trump was referred to as “Twitler” and “an orange alien,” (given the fact that a giant inflatable of Donald Trump as an orange baby in a pamper was unveiled at the parade). There were also signs that are unprintable on this website due to their extreme language. Anger also manifested itself in the form of ugly fights between protestors.

Some of the most striking signs we picked out, read “No human is illegal,” “Love Trump's Hate” and “Are they reunited yet?” The unity of people under the words “human” and “they” again emphasise that equality should be upheld in society.

The protest signs also correlated to signs paraded around the Pride celebration on July 7th. The LGBT society wanted to be free to express themselves and through that expression to gain acceptance.

The most important lesson here is that regardless of people’s feelings towards Donald Trump, it is important for us to carry on promoting love, equality, and above all, acceptance. Anger and violence never solve anything! When we fight anger with anger it only serves to make the problem worse. Hating Donald Trump for his policies only serves to put more anger into the world, rather than working together to promote more inclusive, peaceful efforts - and this starts in our own lives and our own families. This doesn't mean we don't take action and don't protest, it simply means we don't do it fuelled by hate.

That is why we felt the best sign at the event was the one saying "Love Trump's Hate." It can be read both ways, that love does indeed overcome hate but also that we ought to literally "love...Trump's hate."

Mother Teresa was an advocate for peaceful protests. One of her most poignant quotes was:

“I will never attend an anti-war rally; if you have a peace rally, invite me.”

We should do well to adhere to this, as fighting hatred with violence will not extinguish it, but will turn us into the embodiment of the very thing that we are fighting against. We would do well to remember that love, does indeed always trump hate in the end.

Here's why Mother Teresa never wanted to be invited to an anti-war rally...