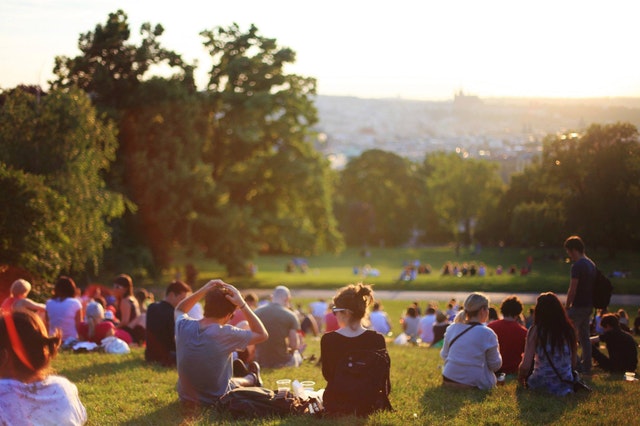 Image by Leah Kelley at Pexels


If a child is raised by a village, then it does us well to remember the words of Archbishop, Desmond Tutu when he said “my humanity is bound up in yours, for we can only be human together”.

​​Although some, mainly in the English speaking world think of the phrase “it takes a village to raise a child” in terms of a stereotypical 1930s village, it is time to consider what it means in the 2020s in the local community of the internet, and the diverse areas of living we find children in - from the village, to the suburbs, to the inner city, to homeless camps, to bedsits, to motel/hotel/B&B rooms.

Within the “village” one of the central buildings has traditionally been the Church - in both senses of a real presence and of a place to turn to for the big events in our lives - hatch, match and dispatch. One of Christ’s commissions to us was that we bring the children to a place of safety by not only admonishing the disciples for turning them away but also by the statement that anyone who harms a child will be punished. So how was the “village” a place of encouragement and mentoring in the support of the children and what should we do to give them a space to grow and a sense of stability and community in order to do so?

One of the things that many people negatively associate with young people today would revolve around the issues they see as relating to “law and order”, so let us take as a topic the local police. When we look at our idyllic village we see the local police officer living with their family in the village and walking or cycling around the village where they are seen on a daily basis by the locals, offering comfort to their security. The lack of this daily presence, due to so many reasons, in any community is often perceived by some as being the downfall of an orderly life - often then blamed on the youth. Yet, with more and more use of the internet for crimes, more and more resources are being used by the police in that global environment to investigate criminal activity - whether that’s bullying, harassment, theft and scams or sexual abuse to minors. These activities are done out of sight of the general public but, quite rightly, are seeking out those who attempt to harm our elderly, our children and our vulnerable - protecting them from the results of the harm that they get into due to their natural development or vulnerability. Therefore, if we are fortunate, then we never see and rarely hear of these resource-hungry activities which go on in the background and which take up the time and human hours as needed.

"We are condemning young people to become a lonely, lost generation with nowhere to turn" - YMCA Out of Service Report

So yes, we “see” the youths hanging around and so they are easy targets to blame and, due to their number, are often scary to some, so we ask “where are the police and why aren’t they arresting them?” But, how many of us then ask - where are the youth groups which were around when we were young? They also have been hit by a lack of resources and facilities. Another institution present in our idyllic village which worked hard in making the “it takes a village to raise a child” was either the more formal youth groups of the Scouting type movements or the informal youth groups for older kids. Not only have the facilities disappeared, but so have the volunteers and leaders - so where are they? Why are we not volunteering? More importantly, at a vital time for human development, who can the children talk to and what spaces have they to visit where they can relax, kick back and rebel safely?

"The soul is healed by being with children" - Dostoevsky

In our idyllic village where everyone raises the children, we have also lost so many schools and teachers - those left are often larger and teachers overworked and pressurised to ensure goals of high attainment are met at the loss of education geared to improve the child and their mental health, let alone noting any changes in them or their family situation. Social services again have so many pressures so organising any multidisciplinary meetings is difficult and can take so long that they are often too late to help by early intervention. Sunday schools and the wider church community lack volunteers and clergy so don’t get out on visits and rely on neighbours to flag up issues. GPs don’t know which children are now acting as carers or which parents are ill, which children have developmental needs and who need extra support, so all the figures of authority and guidance we previously had raised the children no longer have time or just don’t exist, allowing many to fall down the cracks. So we simply cannot and should not leave it to the “professionals” when we can see and help and alert ourselves.

"Our most important task as a nation is to make sure that all our young people can achieve their dreams" - B. Obama

When a child does get into trouble, few countries have the option of something like the Children’s Hearing Panel or Children’s Courts which are found in a few countries where the panel is made up, often from professional volunteers with a professional background of child developmental who seek to intervene cross-disciplinary to ensure that the child who has committed a “crime” is taken down the route of positive restorative justice with youth focussed initiatives to help them change from instant reactivity to positive contributing members of society. This is now being encouraged in more countries by the United Nations who are seeking to encourage the building of an approach which is, especially to teens, more developmentally based, creating a child-friendly justice system of rehabilitation - which would, after all, cost less and be more efficient than the oft-wanted punishment along the lines of “spare the rod, spoil the child”. Several studies have shown that authoritarian ideas of discipline, which do not work - rather allow the children to learn the boundaries and consequences of their behaviour and not scare them into obedience and lack of confidence. (eg Trautner, Michigan State University, Jan 2017: Authoritarian Parenting Style)

"Always smile back at little children. To ignore them is to destroy their belief that the world is good" - Pam Brown, Aus poet

We are the neighbours in our community - both virtual and real - and whilst we may be scared, when did we last smile and say hello to a child?

Children in towns, and cities, and the villages are all the same! They like to be noticed, to be heard, to know someone acknowledged their existence, to be brought into conversations - especially about their future, both personal and regarding their locality and the world globally. How often, when we see a youngster speaking out well, we praise them, but to get to that point, they have had the opportunity to be heard within their family, their school and other public speaking opportunities. What can we do about these in our “village” who don’t ………? Their voices are also valid, even if they aren’t as eloquent. Where can we open to let them come in? How can we get alongside them to enjoy their curiosity and enthusiasm that they not only bring to life in general but can infect us with and make us better people and more “childlike” in our approach to new things, to change, to people? Why don’t we volunteer our time and be open to their voices, helping them to develop and learn confidence they can then use to build their own lives, boundaries and respect.

Maybe “village” isn’t rooted in place, but in our hearts and minds and mindset - and, as Jesus asked the disciples to allow children to come to him - maybe we must remember that we are the people in the village who are needed to raise the children - and we must do it in a loving and caring manner. “Children need models rather than critics” - Joseph Joubert, but then we must never forget Desmond Tutus’ words “Children are a wonderful gift.” They have an extraordinary capacity to see into the heart of things and to expose sham and humbug for what they are.

If we don’t do something to help the situation now, then we must remember that, as James Baldwin said, “children have never been very good at listening to their elders, but they have never failed to imitate them.” So we are the ones to change this and not the children who follow us through life.

To discover more about how we can help children especially through things like online trolling and bullying, click here...

National Youth Agency Survey initial summary of findings, published November 2021 found that youth services in non-affluent sectors of society have half the amount of youth groups as affluent areas, with many in both facing closure due to funding.

Information relating to the Children’s Hearings in Scotland can be found at www.chscotland.govuk, including how to volunteer and the policies and procedures. You can also hear the impact that this style of justice has on children’s lives on the same website.

About the Author: Rachel Cox