Skip to content
Why Do Top CEOs Pay Tony Robbins $1 Million a Year?

Why Do Top CEOs Pay Tony Robbins $1 Million a Year? 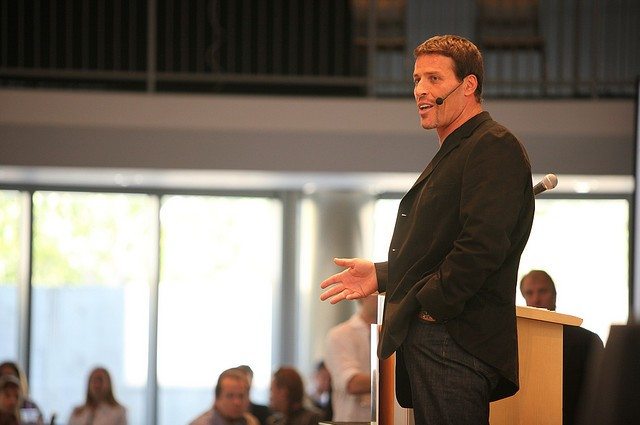 
Tony Robbins is a globally recognised motivational speaker and coach who will charge CEOs and other global leaders in excess of $1 million per year for his guidance. So why is it that these people are prepared to invest these amounts annually in what Tony Robbins is offering?

In an excellent Fortune Magazine article, some of the secrets as to how Tony Robbins goes about coaching his private clients were revealed. At the heart of it; Tony Robbins provides the highest level of accountability and discipline for people who are committed to being the best leaders they can be.

Tony Robbins recognised from a relatively young age that he needed to learn from successful people in order to achieve the level of success he was looking for. This hasn't just come from reading about legends, but also spending time with people at the top of their game to learn about the principles behind their world-class success.

"Looking for evidence that his biography would not limit his destiny, he dove into books. Robbins says he studied speed-reading and gave himself a goal of reading one book a day, gobbling up stories of great leaders as well as self-improvement literature."

“I’ve had the privilege to be around some of the most successful people on the face of the earth, the best in the world at what they do. The one common denominator is hunger. So I can’t create that. But I can unleash it in people. I can trigger it.”

He Walks His Talk

In order to maintain a demanding lifestyle spent mostly on the road, Tony Robbins maintains an incredibly high level of discipline which involves him nurturing his physical, emotional and mental health. In short he takes what he has been learning and applies it to his own life! Here are some examples of how Tony Robbins walks his talk of leading a disciplined life...

"He takes 10 to 20 minutes a day to put himself in a positive state of mind. First he does a physical and breathing routine to change his state, and then he focuses on one emotion. He likes to finish by focusing on three goals he wants to accomplish."

“I prime gratitude, because of all the human emotions, you can’t be angry and grateful simultaneously,”

The billionaire CEO and Founder of salesforce.com; Marc Benioff, said when reflecting on all he learnt in his degree in entrepreneurship,

“You don’t really have tools for leadership. And that’s what Tony gave me.”

Paul Tudor Jones; founder of the $13 billion hedge fund Tudor Investment Corp., said that his work with Tony Robbins started in a way that he wasn't necessarily expecting,

“By controlling my body, which for me was an easy win, the path was then much easier to control my mind. He was right.”

Ultimately when coaching private clients, Mr Robbins looks at the whole person and provides daily accountability that increases the level of performance of those he is serving,

"Psychologically, I’ll measure a person’s weight every night. If this person starts gaining weight, if I see that something’s happening with them physically, I can see that something is happening emotionally. Within a few seconds, I can go, ‘Four pounds! What the hell happened over the weekend?"

Here's the link to the Fortune Magazine article.