Skip to content
What do Tiger Woods, Mozart and Warren Buffett Have in Common?

What do Tiger Woods, Mozart and Warren Buffett Have in Common? 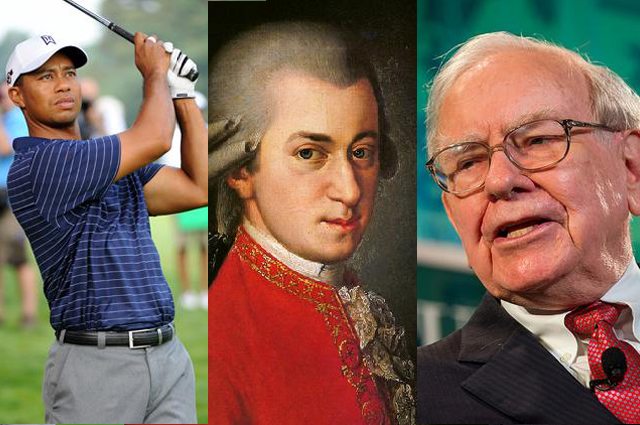 The answer to my great surprise, and potentially yours is that THEY WERE NOT NATURAL GENIUSES..

Yep, take a second or two and read that sentence again. Maybe 3 or 4 times. How does that make you feel? Are you surprised, uncertain or maybe even a bit dubious? Successful people are often said to be "blessed with talent" or just lucky. Well today I hope to shed some light on why that is categorically NOT the case.

I have to confess I felt relieved when I began to learn that these 3 men who are or were considered geniuses were not born that way.

I doubt there is a finance student in the world who hasn’t heard of some legendary investments of Warren Buffett, one of the richest men in the world. But he, like Tiger Woods and Mozart nurtured their talent through hours and hours of painstaking hard graft and sacrifice, they were not just "lucky" or particularly "gifted".

In a great book called “Talent Is Overrated” by Geoff Colvin, he delves into their pasts and looks at their upbringing. In every case they had a father that had a high degree of competence and discipline in their related field. Mozart’s dad was a piano instructor who started teaching him when he was very young. Woods' dad was a golf fanatic who used to be in the military and started taking him to the driving range at 2! Buffett’s dad was a stockbroker and Buffett in his early teens started to learn to invest! It's clear in recent years that Tiger especially has lost the strong mental focus and discipline he once had.

What all of these men had in common at their peak however, was the focused support and determination to learn and practice their skills. They spent every hour they were given focused on their craft. They didn’t give up when they wanted to for an easier life! They had teachers, they had mentors, and they developed the discipline in themselves as a result. Their success was no accident!

So why is it then that our society often portrays 'genius' as being a trait you are born with, or that those human beings are somehow special?

Personally, I think it’s because if we realised that genius was a result of hard work based on sound habits and fundamental principles, we would then have no excuses but to take responsibility for our lives. There would be no excuses to know that we can up our game to achieve more based on the right fundamentals. It takes the huge effort of overcoming our internal laziness to strive to achieve what we want no matter what.

What is one of the best ways to overcome our inertia and improve? Colvin suggests you need to practice your chosen tasks more deliberately through finding a coach/ mentor to help you see gaps that you are unaware of, or don’t want to look at. Look out for more examples of this in Part 2 of this post soon. Finally I'll leave you with this great quote from one of history's true legends...

"Excellence is an art won by training and habituation. We do not act rightly because we have virtue or excellence, but we rather have those because we have acted rightly. We are what we repeatedly do. Excellence, then, is not an act but a habit."