Skip to content
What Convinced Mikhail Gorbachev To Award The Nobel Peace Prize To Children?

What Convinced Mikhail Gorbachev To Award The Nobel Peace Prize To Children? 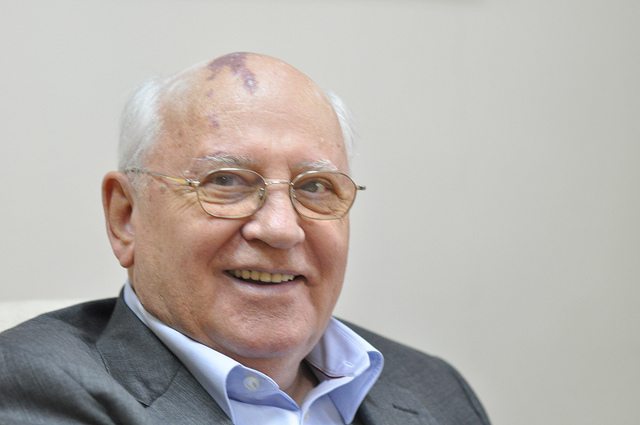 We need to ask and answer challenging questions if we are to challenge established traditions and make a positive difference in the world.

You may know that Malala Yousafzai was the first child to win the Nobel Peace Prize in 2014. However, what you probably didn't know is that it was only because of a decision by the last leader of the Soviet Union; Mikhail Gorbachev, that this was even possible! The inspiring story of how things changed started with the paradigm-shifting experience of successful businessman Marc Dullaert whilst overseas which he described in his own words:

"One morning on the border of Sierra Leone I was woken by an awful sound. It sounded like an animal in distress. I stepped outside and saw a mother from a nearby refugee camp holding her child that had passed away. I was filming documentaries for my television production company and our vehicle had broken down the day before, resulting in us sleeping on the passenger seats. It was an incident that was to change my life forever. Seeing that mother holding her dead child was like being struck by lightning and I knew that I had to do something."

It was this experience that changed Mr Dullaert's life. He subsequently sold his business and set up the KidsRights Foundation. Then after watching a documentary of an inspiring 11-year-old he asked the question, “Why can’t a child win the Nobel Peace Prize?”. Through following his curiosity he then found out that the Oslo Nobel Peace Prize had a statute that had been in place for more than 100 years that prevented children from winning the award.

After being told that the Nobel Peace was 'not for children' by the official body, Mr Dullaert decided to persist and take a different approach:

"Then I heard about the yearly gathering of Nobel Peace Prize winners, chaired by the former president of the USSR, Mikhail Gorbachev. I managed to secure a ten-minute meeting and met him at the Gorbachev Foundation offices in Moscow.

I tried to explain to him my idea of an international children’s peace prize, but despite being friendly, he didn’t speak English and the translator wasn’t helping much either. Gorbachev sat looking at me unblinking. I was getting nowhere. Suddenly, in desperation, I asked, “Mr Gorbachev, do you have grandchildren and do you think you could learn something from them?” It was an icebreaker. He suddenly became emotional and started talking about his daughter and grandchildren. After my short interview, I was sent outside to wait for his answer – 45 minutes in a cold corridor, like a punished school child. I was eventually summoned back into his office and Gorbachev said, “Yes, let’s do this."

The International Children's Peace Prize was also then established by Marc Dullaert to act as a platform for future leaders to inspire other young people. What has driven him is a commitment to his belief that children have an important voice and role to play in making the world a fairer and more equitable place to live. He said,

"Children make up more than half the world’s population and are citizens of countries, despite being treated like second-class citizens. Many leaders and politicians pay lip service to children and jump at opportunities to have pictures taken with them, but they don’t take the time to listen to them. I’m not saying that young people know more than adults, just that they have a different view of the world. The least we can do is consult them when making laws or policies that directly affect them."

Marc Dullaert's story not only highlights the importance of nurturing and supporting the next generation, but also that it is possible to change established traditions through asking powerful questions and taking powerful action. How often is it that we simply accept or tolerate the status quo, even when we don't think it's right? Mr Dullaert shows us that with vision and persistence it is possible for our voice to be heard and changes to be made.

Mikhail Gorbachev shows us that global leaders can have the humility to listen to others in order to make decisions. In fact, it was his acknowledgement that he can learn a lot from his daughter and grandchildren that convinced him to change his view. As healthy human beings, we don't just make decisions with our heads, but also our hearts!

You can read more about Marc Dullaert's story on the Real Leaders site. It also includes the impact the Children's Peace Prize has made.

Malala Yousafzai was the first child to win the Nobel Peace Prize as a result of Marc Dullaert's actions. You can read more about her inspiring story of courage here.