Wangari Maathai - The Incredible Story of The Woman Who Changed Kenya 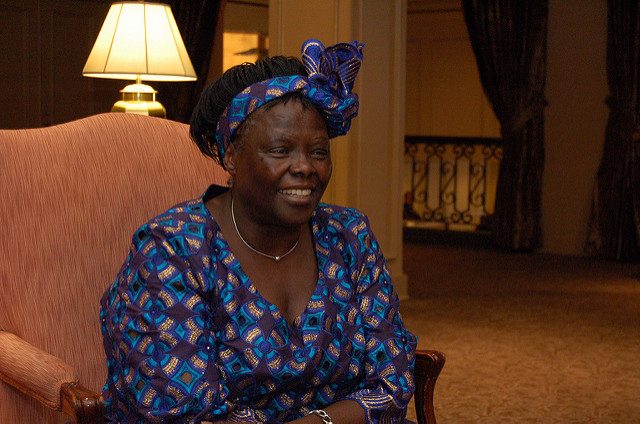 
“It's the little things citizens do. That's what will make the difference. My little thing is planting trees... Until you dig a hole, you plant a tree, you water it and make it survive, you haven't done a thing. You are just talking.”

How often do we hear of an issue - local, national or global - and think, "that’s not right, something’s got to be done!"

Probably most days if you, like me, care about people and the environment. But after a brief thought, these positive intentions are usually relegated to the box marked ‘too hard’. However, if determined enough, incredible progress can be made. In 2004, Wangari Maathai became the first African woman and environmentalist to receive the Nobel Peace Prize for 'her contribution to sustainable development, democracy and peace'. Her example of selfless and sustained work in Kenya is a testament to what is possible when we stand up for what we believe in...

In the late 1960s, having studied biology in America, she returned to her native highlands to find significant environmental degradation. Soon Ms Maathai was hearing from local women about problems such as severe food and water shortages resulting from deforestation. Within a few years, she was able to involve the women in launching the Green Belt Movement (GBM), an initiative with the principal aim of planting trees in the barren highland areas and a secondary purpose of training and empowering its female community.

As Wangari Maathai anticipated, the GBM’s work was not welcomed by the government, local business or those benefiting from deforestation corruption.

Overcoming Imprisonment To Make a Difference

She was even imprisoned for her defiance and hospitalised during protests! But the cause gradually attracted enough support to defeat all opposition and has seen over 50 million trees planted to date. This brought the population of Kenya increased supplies of life’s basic needs: food, water and oxygen. Additionally, it (amongst her other activist and political work) won Ms Maathai the 2004 Nobel Peace Prize. The GBM successfully furthered other causes including democracy, the release of political prisoners and country-wide recycling.

This demonstrates the importance of quashing doubts and embracing a change for good with determination to fight alongside a united community. For Ms Maathai, her mission to repair and nurture the land and so to both empower and feed the population was more important than her security and liberty. She died in 2011 leaving an invaluable legacy.

Of course, most of us rarely face jail or injury in striving for our ambitions and beliefs, but whatever the challenges along your own path, persistence will carry you far. You may be facing your own tough challenge right now, perhaps a difficult family decision, a fitness goal or a fledgling business idea. What are the main pitfalls in your path? It's helpful to recognise and pre-empt them as much as possible and have a strategy for mitigation. For instance, if a lack of time or ideas are obstacles to bringing a vision to life, objectivity and outside support could prove vital.

Why The Right Team Is Crucial

With a like-minded team on your side; the chances of success soar even higher with the inevitable exchange of strength, resilience and motivation. In some cases support will be automatic, depending on the people you have around you. However, if we do not have an understanding of what is important to other people, then it may well feel like we are trying to convince others to get on board rather than have them join willingly.

What we can learn from Wangari Maathai is that she led from the front and communicated a compelling vision that not only was of interest to those other women involved, but also their families and the next generation. She recognised the need to work with others; bringing together enough people who also cared about the future of the nation. Through her understanding she was able to inspire them towards a cause that was bigger than them as individuals. She embraced the principles of mutual vision and win-win to build a community capable of bringing her vision to life. These principles are absolutely key if we are looking to involve others in any project or endeavour! We hope to see you start to ‘plant some trees’ soon... 🙂

You can read more about the life and legacy of Wangari Maathai on the Green Belt Movement website.

We all have the potential to make a positive difference if we adopt the same principles as Wangari Maathai has. Click here to check out the inspiring story of how two teenage girls have been responsible for instigating a plastic bag ban in Bali!