Imagine just starting out in the world. You have achieved your ultimate goal of being accepted to the university of your dreams, and you're deeply in love. Everything in front of you looks bright, joyful and full of potential, and then events far beyond your control turn your whole world upside down! This is exactly what happened to Vera Brittain; novelist, poet, pacifist, wartime nurse and feminist; author of the best-selling memoir, Testament of Youth.

Born in 1893 to a wealthy middle-class family in northern England, Vera Brittain had a dream of becoming a writer and attending Oxford university, much against the wishes of her father. It was a time in history when there was far less opportunity for women than there is today;  the expectations of her family were for her to marry, and to settle down. Her spirit was far from one to be caged, however, and with the help of her younger brother, she was able to persuade her father to let her sit the university entrance exam - which she passed.

Her dream of becoming a successful writer and to secure an independent living from this, was on it's way to becoming a reality. At the same time, she had also fallen in love with one of her brother's best friends, Roland Leighton, himself an aspiring writer and poet and son of an already successful author of the time, his mother, Marie Connor. All appeared promising for her, but then the First World War broke out and her brother Edward, their mutual friend Victor and boyfriend Roland, all enlisted in the British Army to go off and fight.

A Testament of Youth

Testament of Youth is the memoir Vera Brittain wrote after the war, and it chronicled her tragic and most painful journey. One that taught her the futility of conflict - and the strong need to treat all men and women without anger and hate; and instead, as human beings in need of compassion and forgiveness. Through the years of 1915 - 1918, all three men that were most dear to her lost their lives. Roland, who had become her fiancé, was shot and killed just before they were due to be married. Victor was injured by a shot to the head and later died in hospital, and her brother Edward, having survived one near fatal injury, was finally shot and killed just months before the end of the war. It's hard to imagine for those who have not experienced it, what going through such repeated loss feels like.

It was during these years that Ms Brittain became a wartime nurse. Unable to remain at Oxford while those she loved were off fighting in France, she travelled to the front and gave care to British and German soldiers alike, seeing for herself the carnage and destruction war causes to both sides. In the years that followed, she became an ardent pacifist, both after WWI and later during WWII. She was someone who used the tragedy and suffering she'd seen in her life, to find meaning and purpose -  by helping others realise the futility of fighting with each other. To realise that in the end, no one really wins, and everyone suffers in the name of what both sides believe is right.

From Wartime Nurse to Ardent Pacifist

Vera Brittain's story is both a humbling and moving one; one that teaches us all a very important lesson - that life is short and precious and that nothing we hold dear should be taken for granted, especially our relationships with the people we love most. Everything can be taken away from us in a heartbeat, and so the most important way to live is with care and kindness for others, no matter who they are. For me, she teaches us the need to put away our differences and listen to each other, so as to find a way to settle things in peace and avoid the pain, hurt and suffering that fighting inevitably inflicts on both sides of any argument.

"All that a pacifist can undertake—but it is a very great deal—is to refuse to kill, injure or otherwise cause suffering to another human creature, and untiringly to order his life by the rule of love though others may be captured by hate." ~ Vera Brittain

When we look back on any particular reason why we have fought with someone ...  can we really say that it was worth it? Can we really say that it did any good in the long run? If you have someone you're arguing or fighting with right now, what can you do to learn from this story and be a person who brings peace and cooperation into this world, rather than bitterness, anger or hate?

The wars and violence we see around us in the world right now, are only the larger fruit of our inability to resolve our differences on an individual level. So perhaps the more we can overcome our personal conflicts, then maybe this world can become a more peaceful place.

Here is a touching scene from the 2014 film dramatisation of her memoir, played out by actress Alicia Vikander. In this she addresses an angry group of British people vying for retribution with a powerful message of compassion and forgiveness...(the video will open in a new window) 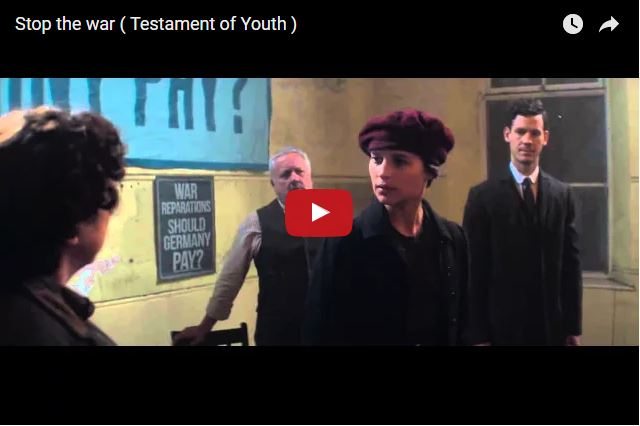 If you're inspired by this article, I suggest you click here to watch this interview of a CIA agent who worked on both sides of the current War on Terror, who shares a very powerful and important lesson...