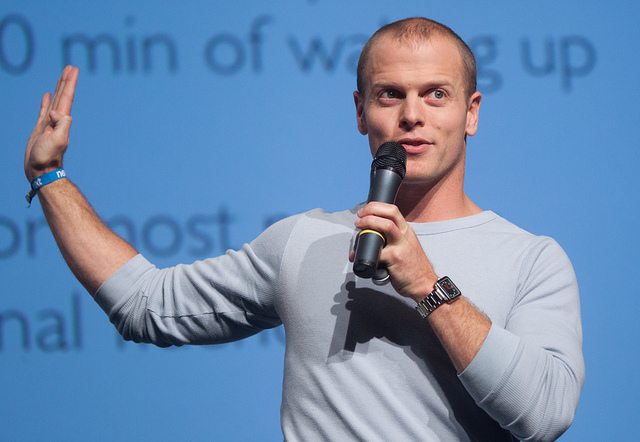 In a media dominated society, it can be understandable why we are sometimes led to believe that the most successful people are somehow better than the rest. Multimillionaire entrepreneur and author Tim Ferriss, a highly successful person in his own right, has also detailed the dangers of putting successful people on a pedestal. In his new book Tools of Titans where he interviews many of the world's most successful people, he discusses some of the challenges he has faced himself which rarely get the headlines compared to his success:

"We all like to appear “successful” (a nebulous term at best) and the media like to portray standouts as superheroes. Sometimes, these dramatic stories of overcoming the odds are inspiring. More often they lead to an unhealthy knee-jerk conclusion: “Well … maybe they [entrepreneur/artist/creator painted as superhero] can do it, but I’m just a normal guy/girl….

Though I’ve occasionally done profiles like “A Day In The Life” with Morgan Spurlock’s crew, I rarely let journalists follow me for a “normal” day. Why?...Because I'm no superhero. I'm not even a consistent "normal.""

This is incredibly honest from Mr Ferriss and it's also reality. To demonstrate his own challenges - he highlights just what he mean's about not being "normal."

"Not long ago, I had a birthday party. A dozen friends and I gathered for several days of wonderful sun, beach, and catching up. On the last day, I didn’t get up until 11:30 a.m., knowing full well that the last remaining friends were leaving at 12 noon. I was afraid of being alone. Like a child, I hid my head under the covers (literally) and hit snooze until reality couldn’t be postponed any further"

"In 2013, I hit a rough patch of three months, during which I cried while watching Rudy [a TV program], repeatedly hit snooze for 1 to 3 HOURS past my planned wake time, because I simply didn’t want to face the day...and considered giving everything away and moving to Montreal, Seville, or Iceland. Location varies based on what I imagined escaping....Seems pretty dsyfunctional."


It's very rare for someone to be so honest about what dysfunctions they have, because most of the time it's harder to talk about our failures and easier to talk about our success. We look better to others and feel less judged! In his book, Mr Ferriss lists even more of his dysfunctions like going to see a therapist for the first time as he was convinced he would suffer pessimism for the rest of his life! Ultimately the point he is trying to make is...

"Most “superheroes” are nothing of the sort. They’re weird, neurotic creatures who do big things DESPITE lots of self-defeating habits and self-talk...Don’t overestimate the world and underestimate yourself. You are better than you think. And you are not alone."

It's clearly evident that legends aren't super-human. They are normal people that have faults just like you and me. Sometimes a lot more! They've just been able to follow fundamental principles and habits of success with more discipline than most people and have maximised what talents they have!

How do you feel after reading this humbling story? Are you surprised that someone as successful as Tim Ferriss has the challenges he discusses?

Does it help give you confidence to see that you too can achieve more if you have the right support? Reflect on this for yourself...

Don’t Smash Against the Rocks of Life