Skip to content
The Incredible Story Behind The Rocky Films

The Incredible Story Behind The Rocky Films 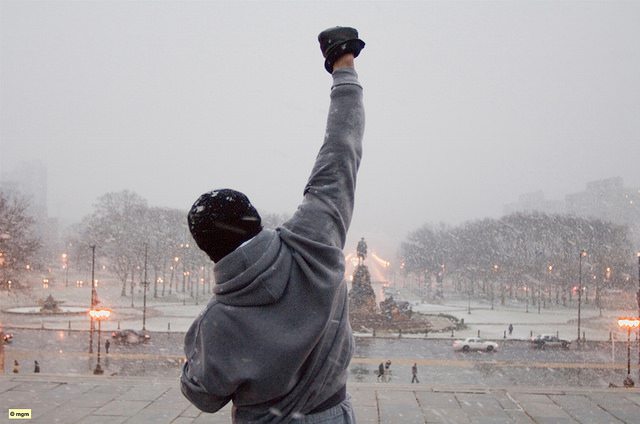 The making of Rocky is an immense story about believing in yourself, triumph and over-coming inner demons...

In 1975, Stallone was just another aspiring actor trying to make it in Hollywood. He knew that he wanted to be a movie star and make a difference. He had already overcome physical illness as a kid to become a strong guy having spent hours in the gym building himself up with his mum's help. However his well-known speech impediment prevented him from getting decent roles. He couldn’t get anything worthwhile despite going to over 1500 acting agents (he visited some of them up to 10 times!)

He couldn’t afford heating in his apartment and his relationship with his wife was deteriorating dramatically because of their poor financial situation and his lack of income. One day he visited a library just to keep warm and he ended up reading about Edgar Allen Poe, one of the first people in America to be a full-time writer and someone who endured a great deal of financial hardship himself. This kept Stallone motivated and he resolved to keep going.

After he sold his wife’s jewellery (just like Soichiro Honda had to) she said it was the final straw and left him while pregnant with his child.

He was flat broke and just to survive Stallone went on the street and sold his dog for $25 - the one thing in his life that he said gave him unconditional love. Stallone said this was the lowest moment. The one thing that had been a constant support was now gone. He broke down crying.

A few weeks later he saw a Muhammed Ali fight on TV against a local guy who was seen as a down and out - someone that would be beaten easily and quickly. However this fighter lasted and not only did he last, he knocked Muhammed Ali down! Stallone was immediately inspired. He wrote the story that would become Rocky immediately after seeing the fight, in 20 hours straight! He thought that people would identify with this story. This was his chance to make a difference.

However no movie studio would buy the screenplay. They said that a boxing movie would never make money and no one would go and see it. So it began again, rejection after rejection after rejection. This went on for weeks. However finally he met 2 people that liked the story. They really liked it. They offered $125k!! (Remember this was back in 1975 and that was an enormous amount of money).

Stallone said he would accept their offer. It finally looked like he had made it. However he had one condition - he would have to star in it. He said he was meant to be Rocky...

However the movie company said this was too much of a risk. They wanted a star to be Rocky, not an unknown nobody! They said take it or leave it...

Stallone had the courage of his conviction and said no. He turned down $125k even after his wife had left him and being totally broke!

Finally a compromise was reached. They offered Stallone $33,000 if he still insisted on playing the lead role. Stallone agreed - he had taken a $292,000 pay cut to fulfil his dream!

The film was made on a budget of just over $1 million and shot in 28 days. It earned $225 million in global box office receipts becoming the highest grossing film of 1976 and went on to win three Oscars including Best Picture. It lead to Stallone becoming a major star and the franchise itself had 5 sequels!

We All Have an Inner Drive

As Stallone says himself, there is an inner Rocky in all of us. It's a story we all face at a certain point in our lives. It’s about what we do when we face constant rejection in relation to something we really want to achieve that seems beyond our reach. How do you think Stallone felt when his wife left him or he had to sell his dog? How easy would it have been to take the $125k and not star in the film or take the studio's final offer of $325k? Stallone still did not give in. He carried on persevering and keeping his dream alive when everyone around him doubted him.

I hope that you too can use Stallone and the Rocky story for inspiration. It's a journey of all true legends, well-known or not. Feel free to share your thoughts in the comments below...

[whatsapp url="https://www.legends.report/the-incredible-story-behind-the-rocky-films/" title="Thought you'd like this article from the Legends Report, it's the incredible story on how the Rocky films were made..."]