Skip to content
The Cities Now Too Hot For Humans

The Cities Now Too Hot For Humans 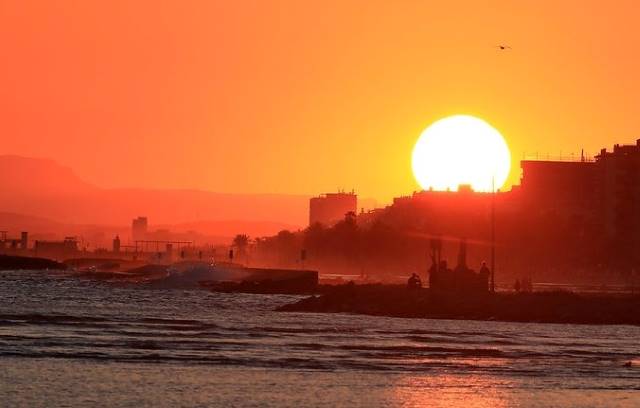 The cities we live in are becoming insufferably hot. A lethal combination of heat and humidity is turning urban spaces into mammoth ovens, making extreme heat one of the deadliest natural hazards of the 21st century. Scientists have predicted that in 50 years, up to 3 billion people could be living in areas too hot for the human body to handle.

Cities absorb a lot of heat; they are a global warming magnet and accelerator. More than half of the global population reside in cities and this is expected to rise to 68% by 2050, meaning that as urban temperatures and humidity levels soar, more people will be exposed to the associated health risks.

The regions that are most vulnerable to extreme heat are South Asian countries – such as Pakistan, India, and Bangladesh – and those located around the Persian Gulf, such as the United Arab Emirates and Saudi Arabia. By 2100, it is estimated that 75% of the South Asian population will be experiencing frequent dangerous heat waves.

We need to address the problem before it affects a percentage of people too high to control. Targeting global warming will reduce heat and make cities safe again. If we don’t act, temperatures will continue to swell, people will be displaced as their days become unbearable, and millions of lives will be lost. Only by caring for our planet can we care for the people upon it.

Cities are much hotter than their surrounding rural areas; this is known as the urban heat island effect. The Environmental Protection Agency found that cities can be up to 3 degrees Celsius hotter than their counterparts – it may not sound a lot, but it’s a monumental spike.

Buildings, roads, and other structures that dominate cities are typically made from concrete, cement, glass, and dark coloured materials which absorb the sun’s heat more readily than green spaces. Such materials can also block heat rising from the ground, leading to higher lower-ground temperatures.

Additionally, urban spaces contain more people, meaning more energy is generated from the likes of air conditioning, vehicle fumes, and lighting, creating higher temperatures. Such surges in degrees can be perilous for human health, the environment, and the economy.

In contrast, green, rural areas have cooler air temperatures as vegetation releases water through its pores; the water then evaporates into the atmosphere and decreases the heat. As countrysides contain less people, pollution levels – hence, heat levels – are also lower.

So, with cities already more likely to overheat, it doesn’t aid the situation when the humidity ramps up too…

Wet Bulb Temperatures: How We Become Too Hot To Cool Down

When our bodies become too hot, we sweat to cool down, but a lethal combination of high air temperature and humidity can hinder perspiring. Higher humidity levels mean that the air is less able to accept the additional evaporating sweat from human bodies, therefore, the body is less able to cool itself. This poses the risk of heat toxicity (similar to sunburn but on the inside of the body) and overheating, ultimately increasing the number of hospitalisations and death.

Global warming encourages humidity. Increased temperatures cause more of the Earth’s surface water to evaporate, leading to more water vapour in the air. Warm air can also hold more water, meaning that as global warming inflates, so do the planet’s humidity levels.

Humans can withstand dry heat, but heat mixed with severe humidity is making the cities we live in deadly.

Some regions have already seen WBTs topple past 35 degrees Celsius, shattering through the threshold for human tolerance.

Jacobabad – a Pakistani city home to 200,000 – crossed the WBT threshold for the first time in 1987, reading 35 degrees Celsius, along with a scorching DBT of 52 degrees. The city has crossed the limit numerous times since, and each time the duration is longer.

Millions of lives depend upon going outside for work, food, and more, but residents of Jacobabad have no option other than to ride out the heat indoors; many residents note that the heat is too much to even stand on their feet, let alone run errands.

“It's a very, very difficult time when it goes beyond 50C. People do not come out of their houses and the streets are deserted,” a shopkeeper living in the city explained to The Telegraph.

Jacobabad is not the first, and it won’t be the last.

Ras al Khaimah – located in the United Arab Emirates – also exceeded the conditions bearable for humans, leaving residents with a reduced quality of life and forcing them to brave the connected health dangers.

Other cities are following the relentless trend toward unsurvivable heat. In 2015, Bandar Mahshahr, Iran, experienced a WBT of just under 35 degrees Celsius – scarily close to the line of human tolerance. The city of Chennai, India, experiences a deadly combination of heat and humidity 140 days per year. Mecca, Saudi Arabia, is predicted to soon become too hot for Muslims to participate in their important pilgrimage to the holy city.

To make matters worse, temporary solutions to the heat also enlarge the problem. As cities get hotter, more people will turn to air conditioning. This can lead to a level of energy consumption so high that the city has a power blackout. Blackouts are more common in poorer regions, like South Asia and around the Persian Gulf, who will need air conditioning the most. It is a paradox that escalates the suffering of those affected.

Without Action, People Will Die

Global warming is the reason cities are becoming too hot; the best way to help calm the crisis is to bring our greenhouse gas emissions down to net zero. We need to drag city temperatures down and rescue those who are on the brink of collapse, otherwise WBTs will continue to rise, risking the livelihoods and lives of millions.

In the meantime, there are ways cities can be adapted to hotter temperatures. Planting more greenery in cities will help cool the air; using light coloured materials will help deflect the sun’s heat, particularly for rooftops; and renewable energy alternatives will reduce the rocketing rates of destructive energy consumption.

If greenhouse gas emissions continue to shoot up at the current rate, millions of vulnerable people will become climate change refugees. As people’s homes become life-threatening, they will have no choice but to abandon their lives in search of relief. This could lead to other regions becoming overcrowded, intensifying problems such as spread of disease. It is the poorest regions of our planet – who are least equipped to deal with mass migrations – that will be hit the hardest.

What Can I Do To Help?

If you'd like to connect with others who are also concerned about these issues, then you can join one of our mastermind groups to discuss knowledge, solutions, and how you can make a difference starting with your own life; small scale changes can have a bigger impact than you may think when as many of us come together and live more in line with our conscience. If you'd like to connect with us, reply at the bottom of this article or contact us on the live chat below and we will be in touch.

We must stabilise the climate before deadly heat makes our cities unlivable. This will only be possible if everyone takes responsibility for their actions and realises the catastrophic consequences our lifestyles can have.

“We are the first generation to feel the effect of climate change and the last generation who can do something about it.”

About the Author: Hannah Hughes