Skip to content
The Shocking Profiteering From The Ukrainian Crisis

The Shocking Profiteering From The Ukrainian Crisis 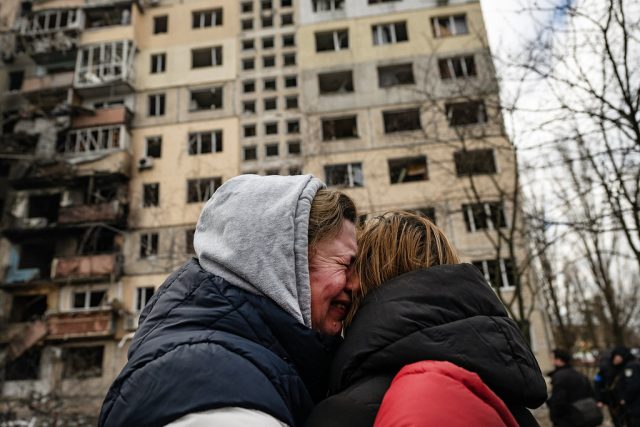 On February 24, 2022, a YouTube video by a Ukrainian YouTuber was uploaded on the platform. In that video, the woman was describing the situation in her country while filming in a supermarket. The shelves were still considerably packed with goods, as people standing in the checkout line had taken just enough for their families, leaving much for the rest of the community.

There is no sense of community in Lebanon. I live here. There is me vs the world. When it comes to dealing with state problems, I’m by myself. I can’t blame the Lebanese people for adopting a more individualistic approach to living in a country that’s desperate to fail. Issues such as electricity, running water, proper heating and cooling, and medication are problems the new government has shied away from.

How Are Lebanese People Surviving?

With the government moving sluggishly to keep up with the basic demands of the average Lebanese household, each family has resorted to taking matters into their own hands.

Private power generators have replaced government electricity, providing families with some hours of light. Each generator's working hours and the cost of each subscription are set arbitrarily. One subscription cost is higher than my old monthly salary.

Finding common medication has become a treasure hunt as each Lebanese person races to each pharmacy in a different city to find the medicine they need due to limited supplies, which creates a sense of competition with other community members. Whatsapp groups dedicated to exchanging medications have emerged, and one can now ask for an Aspicot bottle in exchange for Panadol.

It’s not just medication. Common goods and diesel fuel have gone completely missing from the market. Dozens of reports attest to shop owners and gas stations hoarding supplies, waiting for the currency to lose more value to sell at higher prices.

How Some Are Profiting From the Ukrainian Crisis in Lebanon

Multiple stores are taking advantage of the Ukrainian crisis to profit in Lebanon. Some local produce is ostensibly from Ukraine, so prices have skyrocketed to rival the prices of goods that are actually imported from the European country, giving another excuse for shop owners to increase the prices of local goods. There is little care for the impoverished in Lebanon, and since Russia’s invasion of Ukraine, no new wheat imports were made. Both the government and goods suppliers show little compassion for us.

“Lebanese importers are struggling to get dollars from a subsidy program to buy wheat from new suppliers, who are demanding large down payments and can reroute supplies if payments are delayed.” - The National News

Why Are People Only Looking Out For Themselves in The Midst of A Crisis?

Intergenerational trauma is trauma that's passed down to new generations. An experiment was conducted on mice to see if trauma changes the DNA. A group of male mice was exposed to a harmless odour while receiving an electric shock. Soon after, the mice developed a fear of the odour. The mice’s offspring were observed to have a high level of anxiety when exposed to the odour.

In humans, this psychological effect can be observed in holocaust survivors’ children, where their parents and even grandparents have passed down high levels of anxiety and depression onto their younglings even though the children weren’t exposed to the trauma firsthand.

Similarly, in a documentary discussing gender inequality in Afghanistan after the Taliban took over the government and the US retreated away while simultaneously ‘allocating’ 3.5 billion dollars, it was revealed that 87% of Afghan women suffer from abuse. When discussing the high number with a Women’s Rights Activist, Mahbouba Seraj, who owned secretive shelters for domestic abuse victims surmised, “I do believe that 40 years of war in a country can really do some damage on the psyche of human beings.”

Tribalism is apparent in every culture across the globe. It can manifest itself as patriotism or the need for survival in a singular household. Lebanese people are known for their hospitality and their eagerness to entertain foreigners, but that doesn’t translate well to how we treat each other. And Lebanese people are hardly to blame.

Lebanon has seen years of war, devastation, and sanctions that have driven each Lebanese person into a hunter-gatherer mentality. We find women huddled around WhatsApp groups, asking for a pill or two from other members, and men out in the streets hunting fruitlessly for low-income jobs in prestigious positions to pay for a private generator subscription.

Because of trauma and years of war, people in Lebanon have devolved, and a sense of community has almost vanished. The people are a reflection of the government where each parliament member operates for the sake of their followers rather than for the country as a whole, unlike in Ukraine.

A great example can be found in the callous shop owners. These people are a gate between imports and customers where the average Lebanese person is at their mercy in the absence of a government, and shop owners are taking advantage of this newfound prestige. In a shop called Harb near my house, my mother and other customers were hastily evacuated as the shop manager called an immediate shutdown. It was later revealed that the exchange rate of the currency was changing, and the shop owner was hoping to increase the prices. It’s a common theme in Lebanon. Shop owners would routinely hoard goods in hopes of selling them at a much higher price as the currency declines further in value. Even some pharmacies have adopted similar soulless behaviour, where medication is withheld from the sick, as cancer patients beg the government to regulate the unlawful businessmen who are seeking to profit in the midst of a Lebanese and a Ukrainian crisis, where multiple imports are said to have come from Ukraine to justify the spike in prices for local produce. This sounds ludicrous, but ridiculousness has a place in Lebanon. All thanks to a government that’s demonstrably out of touch with reality.

This situation isn't unique to just Lebanon. We are seeing all over the world an increase in selfish interests and human beings driven more by their ego than the human spirit. The values of 'love thy neighbour' and a sense of community are disappearing and, as a result, the world and its children are suffering. We are missing compassion and a sense of duty to do what we can, starting in our own lives, to go against this amoral trend. To go out of our way for those closest to us, to try and extend a hand, to put others first, to support one another, these are the fundamental basic qualities inherent in every human being, not in the human ego. This is what I, and other members here, are trying to do at the Legends Report and beyond. If you'd like to learn more, please get in touch below.