Skip to content
The Incredible Story of Soichiro Honda

"Success represents the 1% of your work which results from the 99% that is called failure.”

Most of you will have heard of the Honda Motor Company - you would have probably driven one of their vehicles or been a passenger in one at some point. But do you know the incredible story of how the Honda founder overcame immense obstacles to get the company to where it is today? It's an incredible story and shows how those who truly pioneer in this world have to overcome tremendous failure to get there.

At the age of 15, with no formal education, Soichiro Honda left his small Japanese hometown in pursuit of his dream. Honda was a passionate engineer who simply wanted to work for the biggest engineering company at the time - Toyota.

Honda had developed a revolutionary engine piston ring and all he wanted to do was work in the assembly line at Toyota. That was his dream. Honda worked day and night in his small workshop to make this dream a reality - even selling his wife's jewellery and sleeping many nights alone in his workshop. Once Honda had completed his piston ring, he excitedly took it to Toyota. However, he was rejected because they said it didn't meet their high standards of engineering.

Undeterred, Honda enrolled in a technical school with a single goal to figure out why he couldn't produce the piston ring at the required quality. After two years of redesigning, he finally came up with a piston ring that was of the quality Toyota asked for. He was given a contract, but he needed a factory to manufacture the piston rings. The piston rings could be used for cars, motorbikes and aeroplanes, but this was not an ideal time at all - the Japanese government was gearing up for war against the United States. Honda simply couldn't source the materials needed to build his factory.

Again Honda found another way and actually invented a new concrete-making process which allowed the factory to be built.

But it didn't stop there. His factory was bombed twice during the war and was virtually destroyed. The steel needed to rebuild his factory was not available as it was being used for armaments. How much more could a man take? Most people would have given up at this point, but the tremendous persistence and resilience Honda had, meant that he found yet another way.

Honda knew that the US Airforce pilots would throw away their used gasoline cans, so he collected them all up and used the steel to repair his factory. He called them "little gifts from President Truman." You would have thought his luck had finally turned, but after rebuilding the factory, in 1945 Japan was hit with a massive earthquake that completely wiped out the Honda Manufacturing plants. He was now completely out of business. Honda sold his manufacturing processes to Toyota and thought his company had come to an end.

Shortly after the war, there was a huge fuel shortage in Japan which made transport around the country virtually impossible; people either had to get the train or ride a bicycle. Honda had a great love for his country and couldn't bear to see it on its knees, so he came up with the idea of putting a small motor onto his own bicycle just to get around. He began to test his new "motorised bicycle" around the town and friends quickly asked if they could try one too. He was flooded with requests for his new invention. It seemed as if Honda was back in business.

However with the country on its knees, Honda needed investment to produce the new "scooters." At that time investment was almost non-existent. Again though, Honda found a way. It may seem incredible, but it is estimated that he wrote an inspiring letter to 18,000 bicycle shop owners to ask for their support to rebuild the country and invest in his new invention. Yes, you read that right, he hand-wrote 18,000 personal letters! E-mail and the internet was still a long way off...when you have strong enough reasons, you will find a way to make it happen.

3,000 bicycle shop owners responded, he formed strategic alliances with them and helped them see how he could increase their bike sales. Suffice it to say he got more than enough of the money he needed to build his new scooters.

From these extremely challenging circumstances Honda has now become one of the most pioneering companies in the world and is still the world's largest motorcycle maker. It employs over 200,000 people worldwide and has revenues of over $10 Billion a year. But it was all made possible through one man's sheer determination in the face of almost unimaginable odds. Can you imagine what he must have gone through sleeping in his small workshop with no money, having sold his wife's jewellery, or seeing his factories destroyed for the third time? All in all, his journey to success took 17 years, we don't usually hear about the hard journey successful people travel but it's so crucial to understand...

I love this story because Soichiro Honda was just an ordinary man, but one who had a dream and never ever ever ever gave up on it. My mentor once said to me that the guarantee of success is to persist until you succeed; to continue to learn from your mistakes so that you change and grow no matter what. That is the surest guarantee of success and you will find it in every true legend. I hope Honda's story will inspire you to overcome any obstacles you may face in your personal life, career or business... 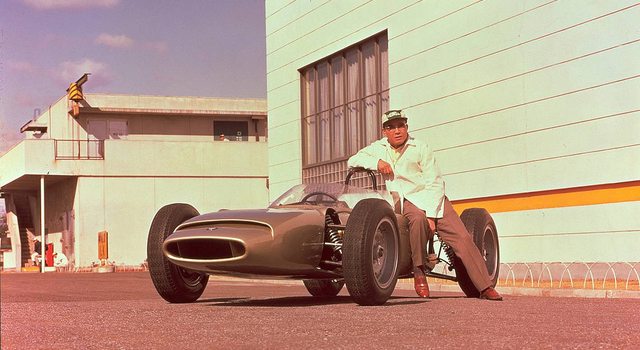 Soichiro Honda with the 1963 Honda RA270F prototype Formula One car