Skip to content
Imran Khan: How a Great Cricketer Aspires To Be A Great Prime Minister

Imran Khan: How a Great Cricketer Aspires To Be A Great Prime Minister 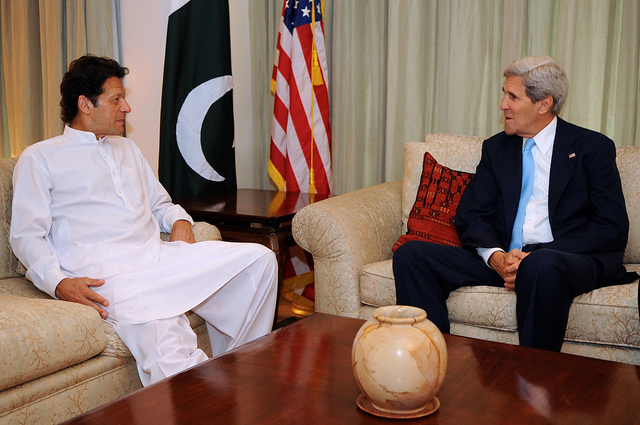 Imran Khan is lauded for his illustrious cricket career but is now Pakistan’s next Prime Minister following on from the general election on July 25th 2018.

Mr Khan is an example of the power of transferring skills in a range of different fields. Even though you work in a particular field, you do not have to stay in that field forever. You can aim to make a difference in as many ways as you can, as it will ultimately inspire more people to become the best possible versions of themselves. The fundamental principles and habits to achieve anything are the same regardless of the field you are in.

Imran Khan made his cricketing debut at 18, in 1971, and retired in 1992 after leading his team to their first major victory at the 1992 Cricket World Cup against England. His other accolades include being one of eight to achieve the all-rounder’s triple, obtaining 3000 runs and 300 wickets, in 75 tests, just short of Ian Botham’s record of 72. He also has the second highest all-time batting average of 61.86.

Why Did He Go Into Politics?

The experience he gained as the captain of Pakistan’s national cricket team, from 1982 to 1992, instilled in him a desire to become a key influencer in the political arena. Additionally, his philanthropy ensured that he entered politics for more of the right reasons than many...to help create an equal and just society. He showed an interest in politics from a young age, graduating with honours in Philosophy, Politics and Economics from Keble College, Oxford, in 1975.

He launched the Pakistan Tehreek - e - Insaf (PTI) party in 1996. PTI’s ideology envisions a modern Islamic republic, which seeks to ensure political stability, economic prosperity and social harmony for all religious, ethnic and racial groups. In a speech directed to a crowd of 8,000 people in Shahdara, he vowed to gain justice for those in Pakistan against “traitors who have made the country poor.”

After his election victory, he assured the people of his country that he would “govern Pakistan like it has never been governed before. All of [his] policies would [bring] up the poorest segment of society.” He would achieve all of this despite being “a victim of many personal attacks.” His dedication to creating a unified Pakistan is largely dependent on his team. He needs to surround himself with people that will not corrupt Pakistan any further and will keep him on the right path too.

However, Mr Khan’s rise to prominence in politics has been hampered by a series of controversies. Firstly, his party gave $3m to the Haqqania madrassa, whose head is known as the “father of the Taliban,” despite criticising the Taliban for inciting violence.

Secondly, he states he is a supporter of liberalism but has been vocal about his anger over US drone strikes against militants in Pakistan’s tribal areas. Most recently, Mr Khan has been accused of colluding with Pakistan’s military; a military which has ruled Pakistan via coups for nearly half of its 71- year history.

Jemima Goldsmith, however, one of Khan’s former wives, praised him for overcoming “humiliations, hurdles and sacrifices” to provide an incredible lesson in “tenacity, belief and refusal to accept defeat.” She went on to mention that the result of Imran Khan’s first election in 1997 was in stark contrast to his result in 2018. Khan was “politically naïve,” which resulted in a “clean sweep” the other way.

As great as one man or leader is, they are only as good as the community they build around them. Barack Obama had fantastic intentions for the US but ultimately he was hamstrung by the powers that be and elite corporate interests that have influenced many presidents. That is the challenge facing Imran Khan now.

As Mr Khan prepares to be the next Prime Minister of Pakistan, he will need to unite the government and the nation to achieve his common goals. His task will not be easy, especially since he faces a country with numerous challenges, including tribal factions in the North West, economic obstacles and security threats. We will have to wait and see what will become of Pakistan in the years to come. Read more at the Guardian...

What do you think? Will Imran Khan be good for Pakistan? Comment below...

If you'd like to be involved in initiatives and projects to make a difference to the world around you, contact us on our live chat.

Read about one of Pakistan's true legends, Abdul Sattar Edhi and how he brought people together to make a difference...