How “The Greatest Leader Who Ever Lived” Built His Team 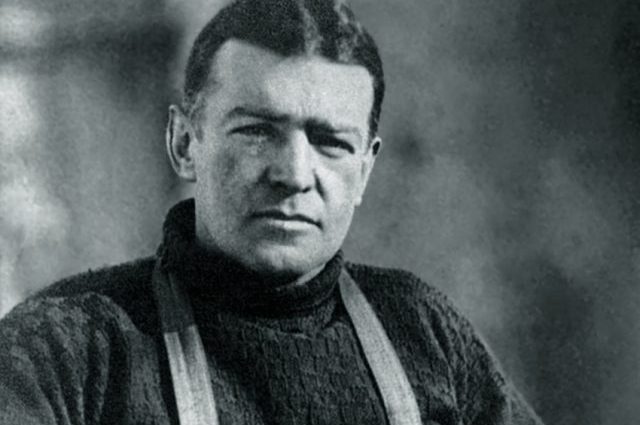 “Superhuman effort isn’t worth a damn unless it achieves results.”

Sir Ernest Shackleton 1874-1922, has been known as “the greatest leader who ever lived bar none”. His dream was to lead the first team across the Antarctic continent on foot - a journey of 1800 miles, -50C temperatures and extreme winds. In this article, we’ll explore the first vital step he took in planning this venture and the underlying principle he stood by. One that paid off greatly when disaster struck and their lives hung in the balance. It is the Principle of Personal Vision. 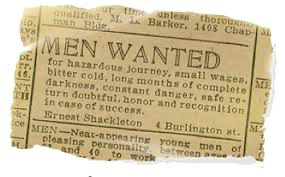 This advertisement, posted by Shackleton in The Times prior to the greatest chronicled survival story of all time, sought applicants of a certain calibre...

The first step to any adventure is to look within - at your qualities, your attributes, your desires and your willingness to act on them...

What might you ask yourself before applying for the job advertised above?

Sir Ernest Shackleton knew his dream was an arduous one, with great risk. The Endurance expedition would sail to Antarctica across violent, ice littered seas before beginning the land crossing. He promised glory if success was attained. His advertisement, short, but poignant, delivered his message in spades:

1914: Polar explorer Ernest Shackleton (1874 - 1922) on board the 'Endurance' in London before leaving for the Antarctic on the Imperial Trans-Antarctic Expedition 1914  (Photo by Paul Popper/Popperfoto via Getty Images/Getty Images)

Personal Vision Is The Way You See Yourself

Ernest Shackleton kept a daily journal for self-reflection among other things. In it, he clarified his Personal Vision - the way he saw himself and the world, his perception of himself. In other words his entire philosophy on life.

Why offer such risk? What qualified him? He had many years of seamanship on his resume. He had joined Robert.F.Scott on the National Antarctic Expedition which drove to within 745 miles of the Pole. He had knowledge and skill at least, but, alone, that wouldn’t do the job... The second child of ten, with eight sisters and a brother, all of whom were brought up by his mother and aunties, young Ernest Shackleton grew up in a loving home surrounded by attentive females. He was a natural big brother. Humorous, imaginative, mischievous, with a genuine softness. Describing himself he wrote,

‘I am a curious mixture, with something feminine in me as well as being a man… I have committed all sorts of crimes in thought if not always in action and don’t worry much about it, yet I hate to see a child suffer, or to be false in any way’.

As well as boisterous, Ernest Shackleton saw himself as nurturing, able to take care of his men. (Many expedition teams of the past had perished under an authoritarian leader who cared more about results than people.)

Understand Yourself Before Taking Risks, You Will See What You Need

Adventure comes with many unknowns. Ernest Shackleton couldn't do it all. He needed to find characters that would be an asset to the expedition, supporting and complementing one another in times of chaos.

He needed a captain that would share his vision and enthusiasm. Capt Worsley had fitting bravado. He was bold, eccentric - a “mad hat”.

T.W. Edgeworth David, the geology professor twice the age of most crew, was hired on the predication his calm would be “a great influence for good amongst the younger men”.

Leonard Hussey was hired for his good humour - he became a joy in dark times.

Explorer Frank Wild (1873 - 1939) looking at the wreckage of the 'Endurance' during the Imperial Trans-Antarctic Expedition, 1914-17, led by Ernest Shackleton. (Photo by Frank Hurley/Scott Polar Research Institute, University of Cambridge/Getty Images)

Your Personal Vision Can Often Be Skewed. Others Often See More of Your Potential

Ernest Shackleton took proactive measures to discover the characters of the applicants. His interviews were spontaneous, off the cuff in a way that challenged their view of themselves and opened deeper realisations. To the surgeon, he asked if he could sing:

“oh I don’t mean any Caruso stuff, but I suppose you could shout a bit with the boys?”.

The way in which candidates responded was more important than the content of what they said. Powerful lessons for us now even when interviewing for jobs.

He met the photographer Frank Hurley on a visit to the cinema. Mr Hurley’s photography was highly prized and he was also “full of good suggestions”. Sir Shackleton hired him, a wise choice - Frank Hurley was able to salvage remains when sea ice crushed the ship, and inventively turned them into useful items, including a stove.

Ernest Shackleton Knew He Was Only As Good As His Team

A clear Personal Vision was the first step in planning the adventure. Success was dependent on each man knowing themselves and their comrades and how best to work together...

28 men joined the Endurance expedition in 1914. Those 28 men watched in horror as the Antarctic sea ice trapped and froze their ship “like an almond in a chocolate bar”, crushed it with a million tonnes of pressure and dragged it beneath the surface. 2 years of survival lay ahead before they eventually found rescue on South Georgia Island. ‘Who am I now?’ they may have asked themselves. And rightly so. But that deed had been done.

The question had been asked from the beginning. It was time to act on it.