Skip to content
How Did Thomas Edison Invent the Lightbulb?

How Did Thomas Edison Invent the Lightbulb? 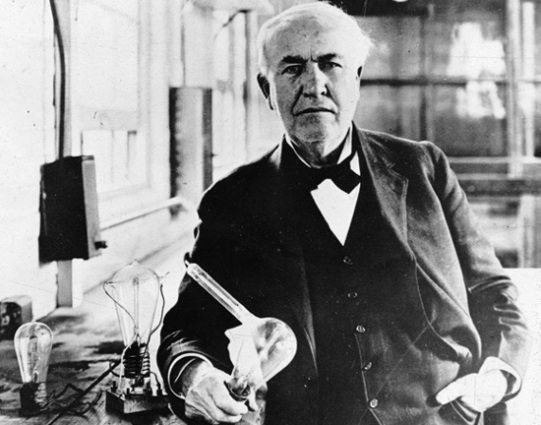 Thomas Edison was the founder of General Electric (one of the world's largest companies) and the inventor of the electric lightbulb. He also patented 1,093 separate inventions which is an extraordinary number for a single person to achieve. However, Edison didn’t do it alone as this article will explore...

He had the ideas and the creativity to come up with the designs, but he also knew he needed help to make them a reality. So he formed a team of extraordinary people to help him realise, patent, fund and commercialise these ideas within his Menlo Park Laboratory. Working with the right people allowed him to do incredible things and to give you an example, here is the close team of people Edison worked with to make the lightbulb and the whole electrical power grid behind it in 1920’s New York!

As well as a team of carpenters, machinists, general laboratory helpers, bookkeepers and secretaries!

All these people were experts in their fields but crucially had the type of character Edison was looking for (often pulling all-night shifts with him). Without their individual additions to the whole idea along with Edison's driving vision, the whole thing would have never come about! Working in this way the old adage; ‘the whole is greater than the sum of its parts’ is true. Edison could in no way do the book keeping, draw up the patents, make the tea, craft the wooden frames, blow the glass bulbs and create the wire filaments all on his own!!!

Yet how many people try to build companies and organisations by themselves every day? - I did once and it doesn’t work. Thomas Edison, Henry Ford, James Dyson, Elon Musk, Mark Zuckerberg, Richard Branson, Enzo Ferrari, Freddie Laker, Alan Sugar and John J. Sainsbury all brought a team of people around them as soon as they wanted to make their ideas practical and workable.

Behind Every Legend is a Legendary Team

When legends have a collective vision to aim for, they know they need to bring together the skills, abilities and crucially, the right people with the right character to achieve it. The desired outcome is then of a higher level of quality than any single person could have achieved by themselves. It’s who we choose to surround ourselves with that will make the difference and affect how well our ideas can be brought to life. Edison was a master of this and it’s something we can all learn from.

Which legends, past or present would you like to be in your ideal ‘dream team’ to achieve your goals and why? Share in the comments below...