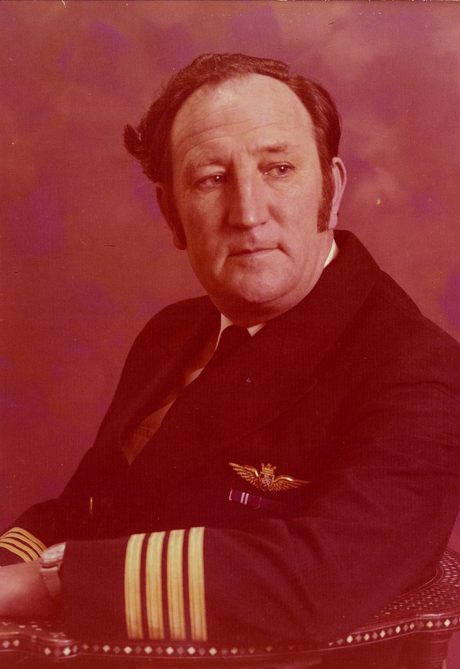 
On the Legends Report, we usually take a look at the successes and failures of well-known legends but what we take just as much, if not more pride in, is learning about everyday legends.

The ordinary people who do extraordinary things in their lives and show us that we all have the potential, as human beings, to do whatever we want as long as we apply the fundamental principles of life.

My father, Captain John Halliday, was one of these people. Sadly he passed away a year ago this week in April 2017 and I wanted to share his story to honour his life, which teaches us all a powerful life lesson; that with enough drive, tenacity and hunger, we can all achieve extraordinary things...

My father was the most tenacious person I have ever known. He was brilliant, loyal, brave, determined and extremely funny. I will miss his brilliant sense of humour tremendously. He had the capacity to make almost anything funny and many a time I had to beg him to stop as my tummy would hurt from laughing so much. To get a serious answer from him about almost anything has been one of the biggest challenges of my life:)

"There’s No Such Word As 'Can’t' Father John"

At the age of four, due to poor health, my father’s mother had to send my father and his brother Brian to a children's home. Sadly the home had very little funds and consequently the boys had no formal education. At the age of 14, my father, like all of the boys, had to leave the children’s home. The day before he left, Father John called him into his office and asked him what he intended to do with his life.

My father said that he was going to become a pilot. Father John said to him that it was wonderful he had such high aspirations but reminded him he had not had the necessary education to become a pilot. With tears in his eyes my father looked up at him and said, “but there’s no such word as can’t Father John”.

My father left the children's home and went to work in a Stockbroker's office stoking the fires and filling up the inkwells. He then educated himself and as you all know, went on to become an airline Captain.

When he was older he wanted to serve our country in the war and applied to the Fleet Air Arm (the air force of the Royal Navy). In order to get an interview, he had to tell a fib on his application and say that he had passed his matriculation (school leaving exam). I gather that is the equivalent of A-levels today.  He arrived at his interview and was sat before a panel of senior officers who immediately told him they knew he hadn't passed his matriculation because they had checked.

However, they saw something in my father and proceeded with the interview. Afterwards, he was sent out of the room to await the decision of the panel. He could hear the officers deliberating about whether to accept him or not. That day, many young men who had been to public schools were sent home, whereas my father was accepted.  He went on to do his training, but 2 months before getting his wings, thankfully the war ended. He then joined the RAF and later became a commercial pilot.

Flying Across The Channel In Ari Onassis' Amphibious Aircraft

The Daily Mail announced that there was going to be a race from London to Paris to commemorate Louis Bleriot, who had been the first pilot to successfully fly across the English Channel in 1909. Another story that I love about my father which demonstrates his determination and initiative is that he wanted to take part in the race. To do this he decided that he needed an Amphibious aircraft and found out that Aristotle Onassis owned one.

He then happened to read in the paper that Mr Onasis was in London for Ascot races at the time, staying at the Savoy Hotel. He phoned the Savoy and remarkably was told by the receptionist that Mr Onasis was at a nightclub and gave him the phone number.  My father called the nightclub and got through to Mr Onasis and asked if he could borrow his aircraft for the race.  Mr Onasis said... "young man, you have such a cheek to call and ask this of me... so yes, you can and told him to visit his secretary in Monte Carlo to make the arrangements.

My father, without even realizing it taught me some of the most important core values that I hold close to my heart today.

Against all odds, my father lived a long life full of adventure and success. He survived the children's home, sadly some boys didn't, two plane crashes due to faults in the training aircraft, and many other life-threatening situations.

My father was a great inspiration and will be greatly missed. Bon voyage Captain John Lewis Halliday may you rest in peace.