Skip to content
From Fame To Fat-Shaming: How Jesy Nelson Showed The Ultimate Strength By Walking away

From Fame To Fat-Shaming: How Jesy Nelson Showed The Ultimate Strength By Walking Away 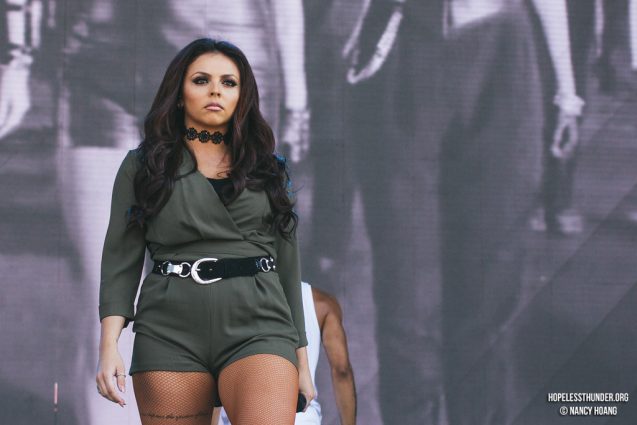 
Jesy Nelson of Little Mix really appeared to have it all - she was part of one of the most successful exports of The X Factor and fans around the world adored her. However, this fame came at a cost.

“There comes a time in life when we need to reinvest in taking care of ourselves rather than focusing on making other people happy, and I feel like now is the time to begin that process.”

This article is going to explore the reasons why she left one of the world’s greatest girls bands, and demonstrates that you don’t have to risk your mental health in order to pursue success when you have the right support around you. Firstly, we will look at the speed at which Little Mix were catapulted to fame, with very little guidance as to how to cope with such a spotlight. We will then explore Jesy Nelson’s peak and the horrific cyber-bullying and exhaustion that came with it. Finally, we will explore what eventually pushed her to make the brave decision to leave the band and seek the mental health support that she’s received from her peers and professionals since.

Essex To The X Factor - The Beginning

Jesy Nelson grew up in Chelmsford, UK with divorced parents, attending regular school before gaining a place at both Sylvia Young and Yvonne Rhodes theatre schools. Throughout her teenage years she was very severely bullied - something that she now believes contributed to Alopecia at a young age. When the band won the most major singing competition in the world (The X Factor), their fans became almost cult-like overnight, with dedicated young fans following their every move; a pressure that the girls were never guided on how to deal with ensued. Although the reality show maintains that there was always a psychologist on hand, many industry experts do feel that this was for ‘show’ more than genuine psychological support.

One of the main turning points for Ms Nelson was the fact that the band were contractually obliged to have a social media platform. Whilst this did mean that the band could have great contact with the fans, it also opened them up to a constant stream of criticism and abuse that could not be simply ‘switched off’ without consequences for the band- no one felt this harder than Jesy Nelson. In fact, many other The X Factor exports, including James Arthur, Cher Lloyd and Will Young (of Pop Idol), have also spoken independently about the detrimental effects on their mental health that being so accessible did to them as a result of reality television.

“Cher admits she was unhappy before [her boyfriend] Craig, 21, came into her life because she was the target of an online hate campaign. ‘To be honest I wouldn’t want to get out of bed in a morning”― Cher Lloyd To The Daily Star

A choice was made not to speak out sooner and it is interesting to consider why this may be. The toxic environment engineered by this sort of accessibility could absolutely be to blame, and in combination with the lack of knowing how to step back, this whole aspect of the individual’s life was never even considered, let alone supported.

The day that Little Mix won The X Factor was the day that they changed forever. The band was immediately launched into press tours as well as the studio. They released six albums in just eight years, and in combination with touring and press appearances, days out of the spotlight were a rarity. This wasn’t helped by the ever-present PR team of SyCo entertainment, who were constantly watching the girls to ensure that they maintained a ‘perfect’ image to their fans. Jesy Nelson struggled with this - what once was a bubbly and funny character was becoming a product of the SyCo machine, and she knew it. Everyone else knew it too - before Little Mix had already won the competition, the criticism of Jesy started and has never really ceased.

Social media and trolling became a huge part of Jesy Nelson’s life. A major turning point for the young woman was a tweet from the now banned Katie Hopkins - a tweet that tragically led to a suicide attempt. This abuse was mirrored by members of the public who could hide behind their computer screens and criticise with no consequence. In her documentary Odd One Out, Ms Nelson explains that cyber-bullying was truly the route of her pain. When she was deemed ‘overweight’ she was a victim of hate, and when she lost weight she received that exact same; and there was no way out.

One of several abusive tweets towards Jesy Nelson from Katie Hopkins, who is now banned from the platform

In November 2020, Jesy announced that she was taking a break from the band, and in December this was made permanent. Following this, she received an out-pouring of support from fans and peers alike - One Direction’s Liam Payne commented that she left for the same reason that bandmate Zayn Malik left (another product of The X Factor machine).

Speaking on TikTok, Mr Payne stated to fans that “I felt that Zayn left for pretty much the same reason in a weird way.”

Other fellow contestants Rak-Su said that this an incredibly brave decision, with Myles Stephenson telling the Metro:

“We all know that she’s gone through drama with people, obviously trolling and social media so I think she made a very smart decision and that decision could have potentially saved her life.”

Her fans have been equally supportive, with streams of thousands of tweets respecting her decisions. The main focus of Jesy Nelson’s life is now rebuilding a healthy relationship with her mental health with access to specialists and, perhaps most importantly, stepping away from social media. Thankfully, the support that the young woman has received since making this decision demonstrates a new outlook on mental health: that it should be treated as a priority and not just an after-thought.

A fan tweeting their support for Jesy’s decision

This article has told the story of Jesy Nelson, and the ways in which her mental health was diminished through following what she thought was her dream. There is every chance now that Ms Nelson looks back at what she could have done differently now, and ways in which getting to this point could have been avoided.

It is true that her support system from a young age was by no means perfect, and she already had some mental health issues in her formative years, but treating mental health as a priority from the beginning could have prevented the ultimate departure from the band, and a dramatic career change.

We can absolutely apply this story to our own lives - just because someone appears to have it all, that doesn’t mean that they are completely fine. Too often, people are told to keep fighting to be successful but this isn’t always the right thing. In particular, this is not possible when we do not have an emotional foundation on which to build our career, relationships or anything else. In combination with this, it is worth considering that the sort of people abusing Jesy Nelson in this way are likely to have had issues of their own. However, we are all responsible for our own behaviour, and it is important for people that have had a difficult start to life turn this into a positive lesson, rather than an excuse to be hateful.

On a personal note, depression has been a big part of my life for the last few years. I’m 22 now, and having graduated from university into a global pandemic and the worst job market in years, my mental health took a dip. I’m very lucky to say that I have an incredible support network of close friends and family who treat my depression as a priority and not a hardship. Personally, I find that I ‘get in my own head’ a lot, so journaling has hugely helped me to relax a little bit more. This can feel slightly unnatural at first, but now I look forward to getting all of my thoughts out on a page - if you have trouble sleeping due to your mental health this is a great fix. I have had days where I’ve felt like this will never get better, but it always does. If you yourself have suffered from any of the issues in this article feel free to contact me or leave a comment below

Above all, remember to be kind - everyone is fighting a battle that you know nothing about. When we surround ourselves with the right people who can lift us up then we can reach our potential and even overcome the challenges of our depression.

In that vein, it’s important to remember some key tips for staying on top of your mental health:

About the Author: Megan Anderson

I am passionate about social change and believe that learning about the strength and determination of others can greatly influence us. I love writing about what makes us human; whether it be physical challenges, mental health issues or something as simple as where we come from. There is so much good in this world and in a time when so much is changing, it's up to us to find it. I hope that my writing can help us do that.