Skip to content
Becoming Great At Prioritising Your Time, By President Eisenhower

Become Great at Prioritising Your Time, By President Dwight Eisenhower

Have you ever found yourself feeling so busy, doing one thing after the next after the next...getting to the end of the day, only to do it all again the next?

Ever feel like you need a way out of that busy madness that we've somehow learned to call 'life'?

Fortunately, there is a different way of doing things - very different. It is based on timeless principles that legends throughout the ages have adopted, from Mahatma Gandhi to Richard Branson.

One of those legends was the late Dwight Eisenhower. If you don't know much about the past U.S. President, blogger and coach James Clear sums him up perfectly;

"Eisenhower was the 34th President of the United States, serving two terms from 1953 to 1961. During his time in office, he launched programs that directly led to the development of the Interstate Highway System in the United States, the launch of the internet (DARPA), the exploration of space (NASA), and the peaceful use of alternative energy sources (Atomic Energy Act).

Before becoming president, Eisenhower was a five-star general in the United States Army, served as the Supreme Commander of the Allied Forces in Europe during World War II, and was responsible for planning and executing invasions of North Africa, France, and Germany.

At other points along the way, he served as President of Columbia University, became the first Supreme Commander of NATO, and somehow found time to pursue hobbies like golfing and oil painting."

Wow. OK so in this article, we are going to explore how President Eisenhower was so damn good at prioritising his time, and how you can be too!

Every day, we get hit with a whole host of urgent situations and demands. Phone calls. Meetings. Deadlines. Emails. Text messages. More emails. We spend all our time trying to deal with these things and we end up losing sight of what's most important to us. Those important things aren't necessarily urgent - they don't press upon us, but when we don't look after them, we and other people suffer. Important things are things like...

Our health and fitness.

Looking after our mental and emotional well-being.

Planning to progress a career or business.

Devoting time to what's truly important is such an amazing gift. It feels good. It often lies at the heart of a lot of problems we face, so it takes care of half the other 'stuff' piling up in our lives. Here is a basic breakdown of something President Eisenhower developed to help him manage his time; what is known as the 'Eisenhower Matrix'... 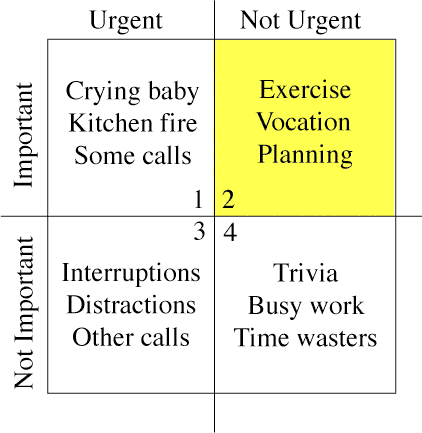 We want to spend as much time as possible in that second yellow block: Important, but not urgent. In order to do that, we need to start saying 'no' to 3 and 4 - not important, and not urgent!

Developing The Strength To Say 'No'...

In today's culture, being busy is by default a good thing. If we are busy, then surely it means we are working hard and on the right track?

Not always. There are a lot of things in our lives that are urgent and important (the first block). Then there are the things that look urgent but are really not important. That's the third block in the image above. It includes casual emails, deadlines that we all know don't make a difference to the company's progression. That's the kind of stuff you ideally want to delegate to other people. The fourth block is basically wasting time; surfing aimlessly and avoiding what we need to deal with.

In order to say 'yes' to what's important to you, you need to start saying 'no' to certain people and things. And you've probably already done this - say for instance when you're at the hospital visiting a family member - that non-urgent call from work can wait, right? Likewise at work, instead of doing task after task, we can ask what will really innovate and drive the company forward? Although difficult at first, it actually feels really good to know you're tending to the important things in life.

Having More Time Is Not The Answer

I wanted to make a mention of the belief that if we just had more time, everything would be ok because then we'd get to take care of everything...

The truth is, all that would do is give us more time to do more stuff!! People like Bill Gates, Barack Obama and Oprah Winfrey all have the same 24 hours in the day we do, yet they are able to get more done because they put first things first and take care of what's most important. In doing so, they end up building great relationships with the people closest to them, who want to help them get even more done!

"Always try to associate yourself with and learn as much as you can from those who know more than you do, who do better than you, who see more clearly than you."

Want Support In Prioritising Your Time?

Building a lifestyle where you are genuinely prioritising what's most important to you can be really hard if you've spent most of your life fighting fires and chasing urgencies. If you would like some guidance and mentorship to develop a bespoke Time Management program, then you can get in touch with one of the team at the bottom of this page. We'd love to help - we know how hard this can be for us too!

Be sure to check out this great article on how Benjamin Franklin planned his days too!