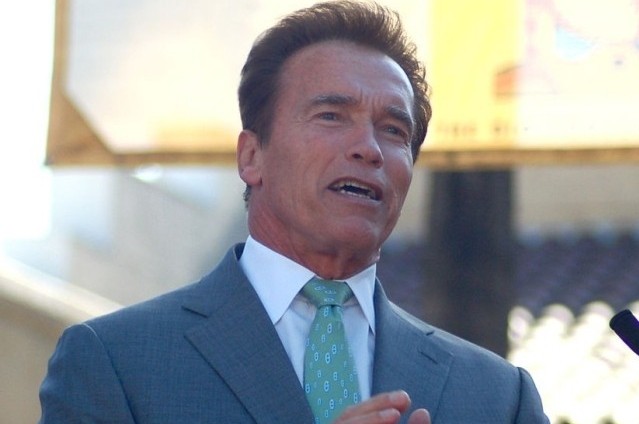 
Recently we shared Arnold Schwarzenegger’s speech at the Climate Change Summit in Paris where he invited global leaders to step up in their efforts to solve the climate crisis. He also recently published a powerful post on Facebook in response to skeptics of his stance on reducing air pollution and protecting the environment...

"I see your questions.
Each and every time I post on my Facebook page or tweet about my crusade for a clean energy future, I see them.
There are always a few of you, asking why we should care about the temperature rising, or questioning the science of climate change.
I want you to know that I hear you. Even those of you who say renewable energy is a conspiracy. Even those who say climate change is a hoax. Even those of you who use four letter words.
I've heard all of your questions, and now I have three questions for you.
Let's put climate change aside for a minute. In fact, let's assume you're right.
First - do you believe it is acceptable that 7 million people die every year from pollution? That's more than murders, suicides, and car accidents - combined.
Every day, 19,000 people die from pollution from fossil fuels. Do you accept those deaths? Do you accept that children all over the world have to grow up breathing with inhalers?
Now, my second question: do you believe coal and oil will be the fuels of the future?
Besides the fact that fossil fuels destroy our lungs, everyone agrees that eventually they will run out. What's your plan then?
I, personally, want a plan. I don't want to be like the last horse and buggy salesman who was holding out as cars took over the roads. I don't want to be the last investor in Blockbuster as Netflix emerged. That's exactly what is going to happen to fossil fuels.
A clean energy future is a wise investment, and anyone who tells you otherwise is either wrong, or lying. Either way, I wouldn't take their investment advice.
Renewable energy is great for the economy, and you don't have to take my word for it. California has some of the most revolutionary environmental laws in the United States, we get 40% of our power from renewables, and we are 40% more energy efficient than the rest of the country. We were an early-adopter of a clean energy future.
Our economy has not suffered. In fact, our economy in California is growing faster than the U.S. economy. We lead the nation in manufacturing, agriculture, tourism, entertainment, high tech, biotech, and, of course, green tech.
I have a final question, and it will take some imagination.
There are two doors. Behind Door Number One is a completely sealed room, with a regular, gasoline-fueled car. Behind Door Number Two is an identical, completely sealed room, with an electric car. Both engines are running full blast.
I want you to pick a door to open, and enter the room and shut the door behind you. You have to stay in the room you choose for one hour. You cannot turn off the engine. You do not get a gas mask.
I'm guessing you chose the Door Number Two, with the electric car, right? Door number one is a fatal choice - who would ever want to breathe those fumes?
This is the choice the world is making right now.
To use one of the four-letter words all of you commenters love, I don't give a damn if you believe in climate change. I couldn’t care less if you're concerned about temperatures rising or melting glaciers. It doesn't matter to me which of us is right about the science.
I just hope that you'll join me in opening Door Number Two, to a smarter, cleaner, healthier, more profitable energy future."
Powerful right? There is a lot to learn...

This is a subject that Arnold Schwarzenegger is incredibly passionate about - so much so that he was prepared to sue the United States Federal Government when they objected to his introduction of air pollution restrictions in California. He knows he is on the side of fundamental principles and truth so he is willing to challenge others on what he feels is right - regardless of who is challenging him. He doesn’t care about pleasing others, he wants to do the right thing.

As a legend wanting to make a difference, he makes a stand using both facts and heartfelt emotion. He taps into the power of his imagination to inspire others and present a powerful argument. You will find all great legends and speakers use the uniquely human quality of imagination to powerfully engage their audiences. Arnold makes a powerful case for us to move to a greener, cleaner future, will you do your bit?

[interaction id="56795fdce6e311024a36d407"] [whatsapp url="https://www.legends.report/arnold-schwarzenegger-i-dont-give-a-if-we-agree-about-climate-change" title="Thought you'd like this Legends Report article, it's a powerful example of heartfelt leadership and courage..."]