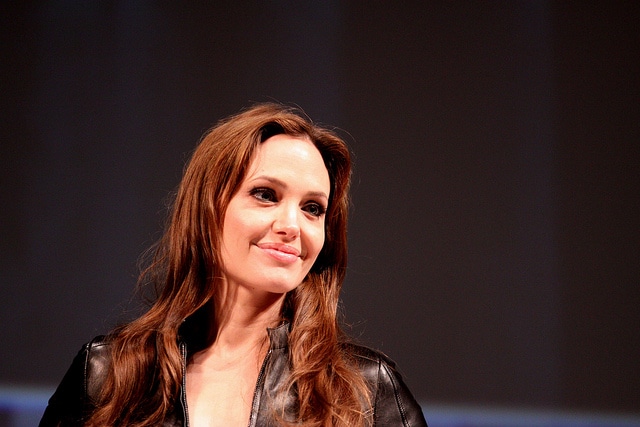 How Angelina Jolie shows us it’s never too late to evolve for the better and become a better person.

Perfection and glamour. These are elements that many people aspire to and become obsessed with, believing that’s the way to be. Many idolise Hollywood as the pinnacle of this glitz and glamour and admire their stars for flawlessness and excellence - doing everything they can to accomplish a similar standard.

We all too often forget that trial and tribulation is one of life’s truest realities which even the most profound and desirable figures are not immune to. Even the iconic American film star Angelina Jolie has hit rock bottom, disclosing she was extremely self-destructive in her younger days.

Her marital life may not be ideal, as the Hollywood power couple, Brad Pitt & Ms Jolie or as they are famously known: ‘Brangelina’ have separated with the actress filing for divorce in 2016. Yet, despite this, the Oscar-winning legend has distinguished herself as a leading public figure. Through her highs and lows, she doesn’t hesitate to disclose the core reality of her life, enlightening us to the fact that everyone has their flaws and it’s not the end of the world if one does ‘mess up’. As Ms Jolie says:

“Make bold choices and make mistakes. It’s all those things that add up to the person you become.”

Going Through a Rough Period...Anyone Can Experience It


Angelina Jolie may be the untouchable diva and her devoted admirers could hail her as the ultimate role model. Nevertheless, there was a period where this UN Special Envoy was known to be utterly horrific - a restless soul with a reckless streak.

"People can imagine that I did the most dangerous things, and I did the worst,” she revealed in an interview with CBS News. “For many reasons, I shouldn't be here."

We tend to live with this misconception that repulsive occurrences happen to regular, everyday people that eventually causes them to spiral out of control and be on the path of demolition. However, legends like Angelina Jolie give us the reassurance that humans in general including global stars can feel empty and lost. She shares that such acts or outbursts are normal – just a strategy to cope with woes or try and figure out life as well as yourself. The Hollywood Star explains:

"My twenties are often misinterpreted as me wanting to be rebellious. And in fact, it wasn’t a need to be destructive or rebellious. It may come out very strange, it may be interpreted wrong, but you’re trying to find out who you are.”

There Is More To Life Than External Beauty And Hollywood Fame

Much to many people’s dismay, Ms Jolie just found the Hollywood lifestyle in which she was raised is too burdensome to deal with - giving her no sense of fulfilment. Thus, partially blaming the glitz and glamour for her restlessness. Speaking to ‘USA Today’, she declared:

“...just being a young girl who was experimental, bold and a bit nutty…I was absolutely self-destructive. I think a lot of young people in this business lose their way. And you know something’s wrong, because it isn’t life as it actually is. It’s like living in some warped reality.”

The mother of six pointed out that the Hollywood environment makes you think that money, fame and beauty are enough - when really there is far more to enjoy and appreciate in life.

In an interview with Hello Magazine she said:

"I was raised in a place where if you have fame and money and you’re decent-looking and have the ability to work in this industry, you have everything in the world.

Then you attain those things and realise you still couldn’t be more empty.”

It’s often the biggest struggle, trying to improve or change for the better when you have walked an unpleasant and destructive path. Whilst going through a hard time, negative thoughts can captivate our minds, giving us the feeling of hopelessness and despair. Unaware of this, what we may need is the right goal in life to make us feel worthy again and full of purpose to once again appreciate our existence.

The Power of Love And Affection

For the glamorous actress, her drive to revive was the simple need of belonging, affection and stability - having someone to be devoted to and take good care of. Despite encountering many turmoils, Ms Jolie  had found what she only thought would happen in happier households with fine upbringing and positive family atmospheres:

“I never thought I’d have children,” she said. “Having come from a broken home, you kind of accept that certain things feel like a fairy tale, and you just don’t look for them.”

“I knew once I committed to Maddox, I would never be self-destructive again.”

The Fulfilment And Greatness of Aiding Others

Though, the most crucial factor that really gave Ms Jolie a sense of completeness and purpose to redefine herself was witnessing suffering - seeing endless tragedy and sorrow. For the highly respected public figure, it wasn’t until she saw people in distress that she realised how bad people really have it. Through this realisation, she found her meaning and her purpose, something that gave her complete gratification – bringing positivity to the lives of the most vulnerable. Something she was seeking from a tender age. The UNHCR Goodwill Ambassador reveals:

“My role as goodwill ambassador has made my work as a film star relatively dull. I can't find anything that interests me enough to go back to work. I'm simply not excited about anything. I'm not excited about going to a film set.”

It’s very easy to get caught up in the idea of perfection and doing what appears to be fitting within society. Yet, when things don’t work out as well as we expect we often despair and lose our way a bit.

Angelina Jolie is a powerful example of someone who has been through a very rough childhood and struggled with finding her place in life. However, she came out the other side of this and found her meaning and her purpose. What her life can teach us by example is that it’s possible for anyone to overcome the challenges of growing up or being a troubled soul. We just need to find our burning why, our meaning and our purpose to do so.

Ask yourself, if you had all the time, money and effort in the world what would you be doing? What would your purpose or fulfilment be? Often when we find our true passions in life, it can involve being able to help others in whatever way we can, it’s something bigger than just ourselves. That’s the journey Ms Jolie is going on and one we can all learn from.

She managed to find her stability and rebuilt herself, gaining further popularity and respect. The key aspect to remember is that we all spiral out of control here and there; yet Ms Jolie's example shows us it is never too late to start again - to improve and evolve for the better.

From Syria To The UK: Hassan Akkad’s Inspiring Journey of Hope, Determination & Kindness

About the Author: Diana Orfani

Passionate Writer/Journalist + Writing for Legends Report. Want to Motivate and Inspire Individuals. Hoping to bring Positivity in the Lives of Others and make a Difference through Journalism or whatever I Aspire to do. Journalist Graduate #2018.