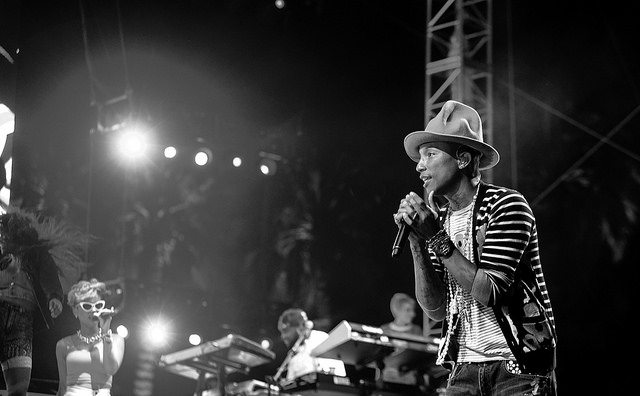 "I just do what I do. It's not something that should be revered as great."

If you've been near a radio, TV or internet in the past year you will have no doubt heard Pharrell Williams' song, 'Happy'. Like it or loathe it, the song is officially the biggest selling single of the decade, selling over one million copies. At one point, it was probably the only song you would hear on the radio!

What you may not know is that Pharrell has been involved in the success of a wide array of other artists for almost two years in his role as a producer, including Britney Spears, Justin Timberlake, Madonna, Jay-Z, Mika, Daft Punk, Coldplay - the list goes on.

At the age of 41, Pharrell is working harder than ever in the music, fashion, education and now the film industry. So what can we learn from Pharrell's journey over the years?

In an interview with GQ, Pharrell shared that up until very recently, he was never really satisfied with the work he was doing;

"I didn't know what happiness was. My definition of happiness was based on what my peers quantified as happiness: boats—you know, material stuff. But then I realized I had a platform; I would meet kids, and meet girls and women who would always point out the inspirational stuff. They would always talk about those songs. I'll never forget: There was this girl that told me her brother had died, and he was a huge N.E.R.D. fan [Pharrell's old band], and he got in a car crash. When they looked in the car, the song that was playing was "Run to the Sun." That scarred me—in a healing way. Because "Run to the Sun" was huge for me with my grandmother... [Pharrell's grandmother inspired and encouraged him to get into music, and was diagnosed with cancer when he was 15]."

Pharrell may have worked with many talented and successful people, but he knew that he couldn't measure his happiness by their standards. He had to discover it for himself. It's only through being aware of what made an impact on him and what was important to him that he started to set his own standards in life.

In another interview, Pharrell shared;

"I read a piece in some magazine where the president of Pixar was talking, and he said that their policy at Pixar was to exercise all ideas. No idea is bad. And if it doesn't work, it doesn't work, but at least you got it out, and you can move on to the next thing. So for me, I make a habit of just sitting down at the piano and playing, and if I don't love what I'm playing, then I don't go and record it. But at least I got it out."

So while 'Happy' may have been a global phenomenon that seemed to come out of nowhere, you'll almost definitely find that there were hundreds, if not thousands of other attempts and experiences that Pharrell has had over the years that were not so successful, but every one of those has led him to this point and beyond. As Thomas Edison said once;

There's a lot we can learn here for our own lives. The more aware we are of what really drives us, the happier, more successful and enriched we can be. Self-awareness lies at the heart of every genius, every legend and as Pharrell has proved, it's not there from birth, it's something that can be learned. Through greater awareness, you can find out what works for you, what doesn't, and continue to build a great life.

Here's the song in all it's video glory....What's your favourite song to help you get you in a great mood? Post in the comments below... 🙂

[whatsapp url="https://www.legends.report/the-biggest-selling-single-of-the-decade-pharrells-journey/" title="Thought you'd like this article from the Legends Report, it's about how Pharrell became so successful"]