Skip to content
An Hour of Nothing: How George P. Shultz Thrived In Highly Stressful Jobs

An Hour of Nothing: How George P. Shultz Thrived In Highly Stressful Jobs 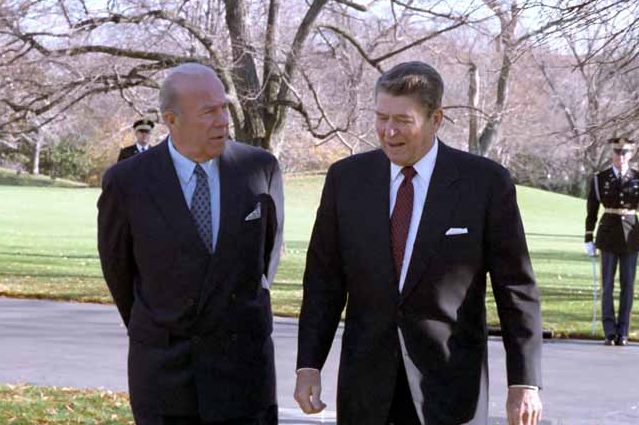 Gain an insight into George Shultz and how he dealt with the pressure of senior governmental responsibility.

What can we learn from the highly successful American economist, statesman and businessman?

As a New York Times article by David Leonhardt showed, quiet reflection is understandably of paramount importance to those making the high-stake, strategic decisions governing global geopolitics and international relations. It can be of great value to all of us too!

It’s fair to say that George P. Shultz had a fair amount on his plate whilst serving as US Secretary of State from 1982 to 1989 (one of the longest serving in that role). His daunting agenda involved: crafting a tense joint settlement – months in the making – between the US and China, over arms sales to Taiwan when the relationship was at an all-time low; controlling Soviet dominance in Eastern Europe in the final decade of the ‘Cold War’, when nuclear weapons were still a real threat; and the first Arab-Israeli conflict, to name but three crises.

Whilst in those days, the practice of meditation was not as well-known and widespread as it is today, there was still clearly an awareness of the need to step back, relax, reflect and be alone. No matter whether you have a white-collar or blue-collar job, whether you are extroverted, introverted, or somewhere in between, or consider your work to be stressful or easy, George Shultz’s mental practice can be valuable and useful to us all.

‘When George Shultz was secretary of state in the 1980s, he liked to carve out one hour each week for quiet reflection. He sat down in his office with a pad of paper and pen, closed the door and told his secretary to interrupt him only if one of two people called:

“My wife or the president,” Shultz recalled.

Shultz, who’s now 96, told me that his hour of solitude was the only way he could find time to think about the strategic aspects of his job. Otherwise, he would be constantly pulled into moment-to-moment tactical issues, never able to focus on larger questions of the national interest. And the only way to do great work, in any field, is to find time to consider the larger questions.’

Nowadays – in an age of smartphones, emails and a competitive job market – we are constantly connected and live under pressure to be quickly switching from one thing to another, forever caught up in a vortex of seemingly endless activity. Whilst it is fine to be busy, always being busy is neither a productive or enjoyable way to live.

Throughout his job, and during most people’s waking hours, we are most often busy and active, to varying degrees. We are in what psychologists call ‘task-positive mode’: when our minds are actively occupied and thinking about what is directly in front of us, at that moment. This is indeed essential to accomplish important tasks, but it is unproductive to spend our whole time in this state. It is also therefore essential, and beneficial, that our brain enters into ‘task-negative mode’ too. When he took his hour alone, Mr Shultz was, perhaps unknowingly, entering into this vital state: essentially a daydream. As Daniel J. Levitin of McGill University put it, this mental zone can be:

“Responsible for our moments of greatest creativity and insight, when we’re able to solve problems that previously seemed unsolvable.”

The writer suggests incorporating a ‘Shultz hour’ into our weekly routine. If not sitting down, try taking a walk. We might even be doing a passive activity which is not mentally taxing or distracting (television doesn’t count!). Scrap the phone (or install a Priority Call Filter, just in case someone special – in Mr Shultz’s case his wife or the President – calls). But have a pen and paper ready to jot down any thoughts, concerns, ideas and so on. This may declutter, de-stress and elucidate the mind, preparing us – whatever our age, personality or profession – for the challenges, stresses and opportunities of work and life ahead.

For the full story on the "Schultz hour" click here...

Why Everyone Ought To Be In Therapy & Why Most Aren’t

This website uses cookies to improve your experience while you navigate through the website. Out of these, the cookies that are categorized as necessary are stored on your browser as they are essential for the working of basic functionalities of the website. We also use third-party cookies that help us analyze and understand how you use this website. These cookies will be stored in your browser only with your consent. You also have the option to opt-out of these cookies. But opting out of some of these cookies may affect your browsing experience.
Necessary Always Enabled

Any cookies that may not be particularly necessary for the website to function and is used specifically to collect user personal data via analytics, ads, other embedded contents are termed as non-necessary cookies. It is mandatory to procure user consent prior to running these cookies on your website.